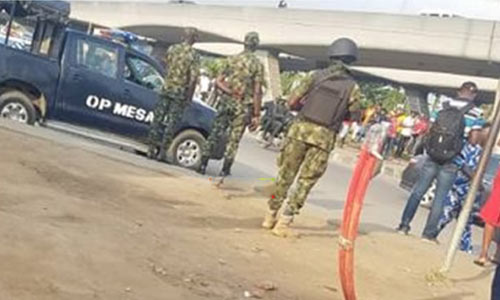 Security agents have surrounded the National Stadium in Surulere, Lagos, in anticipation of the #RevolutionNow protest march scheduled to hold today, The Punch reports.

The security agents have the OP MESA vans parked around the stadium.

The Operation MESA or OP MESA, as it is commonly referred to, is a joint Internal Security Operational platform made up of the Army, the Navy and the Air Force.

Mr. Omoyele Sowore, publisher of the online medium, Sahara Reporters, who was also the presidential candidate of the African Action Congress in the February 2019 General Election, had called for the staging of the #RevolutionNow in what he described as a protest against bad governance in the country.

He was arrested by operatives of the Department of State Services at his home on Saturday.