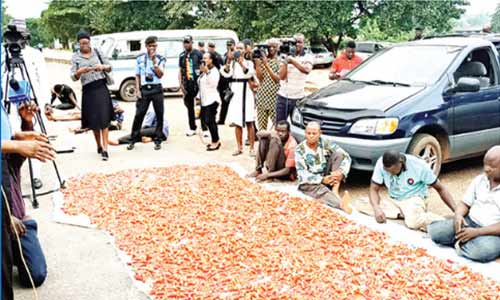 The cartridges, according to the Commissioner of Police, Shina Olukolu, were discovered following a tip-off.

He said they were meant to be supplied to criminal elements in the state.

Olukolu, who paraded 23 other suspects at a press conference, advised residents of the state to be wary of criminals and be security conscious, especially during the approaching festive period. He also asked them to be mindful of the persons they transact business with to avoid being swindled.

The arms dealers, who were arrested on July 23 at the Oke-Bola area of Ibadan, were identified as Adekunle Abimbola, Abel Kojo, Mukaila Ariyo and Ade Adebayo.

While confessing that they had no licence to trade in arms and ammunition, the suspects, however, denied that the items were meant for armed robbers and bandits, they said hunters were their clients.

The CP insisted that the pieces of ammunition were being supplied to armed robbers, adding that the suspects would be made to face the full wrath of the law.

He credited the aggressive drive of the state police command and sustainable community policing strategy for the arrest of the suspects.

Olukolu stated, “The officers and men under my watch have continued to put up spirited efforts to ensure high level of professionalism and tolerance when carrying out their constitutional responsibility of the protection of lives and property.

“Without mincing words, criminals in Oyo State have not had a safe haven to carry out their dastardly acts of unleashing terror on innocent citizens due to constant raids and routine patrols of all nooks and crannies.”

The CP also paraded 21 other criminal suspects, who were nabbed by the personnel of the command in various locations across the state.

Among the suspects were two young ladies in whose possession was found one double-barrelled pistol.

They were said to be travelling from Mushin in Lagos State to Iseyin area of Oyo State allegedly to carry out criminal operations.