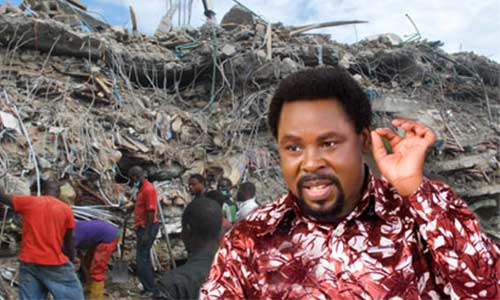 A Lagos High Court sitting at Igbosere heard on Friday that the mode of collapse of the Synagogue Church of All Nations (SCOAN) guest house was inconsistent with structural defect.

A professor of building and structural engineering, Patrick Nwankwo, stated this in continuation of his evidence on the collapsed guest house of the church before Justice Lateef Lawal-Akapo.

Led in evidence by the defence counsel, Olalekan Ojo (SAN), Professor Nwankwo said a building with structural defect would not collapse like a pack of cards, but will collapse partially or sink on one side.

”For a building with structural failure and defect, the mode of collapse should be gradual. It cannot be catastrophic or simultaneous because of the processes of hinges formation and the occupants will sufficiently notice cracks and deflections to enable them move out before it collapses. It is not possible for it to collapse like a park of cards as seen in the case of Synagogue”, Prof. Nwankwo insisted.

According to the international professor of building and structural engineering, “the Synagogue guest house, with rigid frame structures, which had been completed over a year, the whole twelve frames could not have collapsed in the mode in which it happened, it would have been partial and never catastrophic as it seen”.

Nwankwo, who is the eighth defence witness in the ongoing trials of the contractors and supervisors of the collapsed building which claimed over a hundred lives on September 12, 2014, said he carried out an independent and thorough investigation on the collapsed guest house of the church in order to get to the root of the cause.

Giving evidence further, Professor Nwankwo said he carried out structural analysis using Orion Design Software modelling on the beams, columns, foundation, anchorage, expansion joints, rigid zones and mechanism vis-a-vis the internationally accepted Codes of practice for engineering which is British Standard (BS) which all professionals in the field of engineering use guiding principles to arrive at his conclusions.