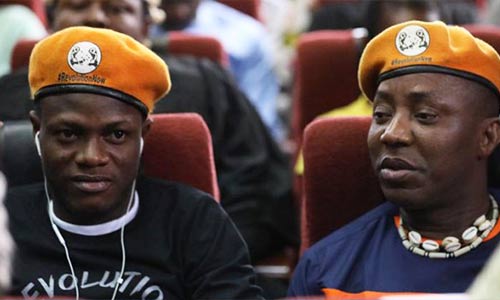 The trial of human rights activists, Omoyele Sowore and Olawale Bakare, was on Thursday stalled following the inability of the prosecution to produce the video evidence of witnesses.

Sowore and Bakare pleaded not guilty to the amended charge bordering on attempt to overthrow the administration of President Muhammadu Buhari through revolution.

Prosecution counsel, A. A Aliyu, had expressed his readiness to call his witnesses but was swiftly objected by the defence counsel, Abdul Mahmud.

Mahmud argued that the video clips, video recording and electronic materials of the witnesses had not been been provided to them.

He added that they would need them to prepare for defence.

He submitted that fundamental rights of the accused must be respected and must be given opportunity to see those evidence.

The trial judge, Justice Ijeoma Ojukwu, therefore asked for a copy of the witness statement.

Upon taking a look at the summary statement, she directed the prosecution to avail the defence the video clips and electronic materials as requested.

Aliyu in his submission said he would comply with the court directive and make it available to the defence team within two weeks.

He also said that he would call the witnesses within five days.

The judge therefore adjourned the matter until March 11, 12 and 13 for definite trial.

Before the matter was adjourned, the defence team confirmed to the court that the prosecution had paid the N200, 000 ordered by the judge to the defendants for delaying the trial.