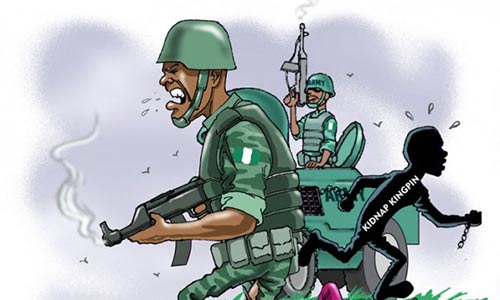 A panel set up by the Defence Headquarters to investigate the killing of three policemen and a civilian by soldiers in Taraba state has arrested two policemen.

Daily Trust reports that the two policemen working at Ibi police division “were arrested for allegedly leaking information to suspected kidnap kingpin Hamisu Wadume of plans to arrest him”.

TheCable could not immediately confirm the report as Onyema Nwachukwu, defence spokesman, has not responded to enquiries made as at the time of filing this report.

The panel was also reported to have ordered the arrest of five soldiers who were at the army checkpoint.

It was further gathered that 60 people alleged to be working for the suspected kidnap kingpin are on the run.

The panel is said to have also dismantled the two army checkpoints along the road where the killings occurred while the bodies of those killed have been conveyed to Abuja.

A source was quoted as saying among those being hunted are drivers of commercial vehicles and motorcycles belonging to the kidnap suspect.

The defence headquarters (DHQ) had set up a panel to investigate the death of the policemen shot by soldiers while conveying the suspect along Ibi-Jalingo road in Taraba.

Sagir Musa, the army spokesman, had said the soldiers mistook the officers for kidnappers, adding that they were responding to a distress call on a purported kidnap incident within the area but the police dismissed his claim.

The police had while condemning the incident, accused the army of lying over its claim that the killing was a mistake.

However, the army said the police was making “inciting and inflammatory” comments over the incident. It warned of a possible escalation of the crisis.