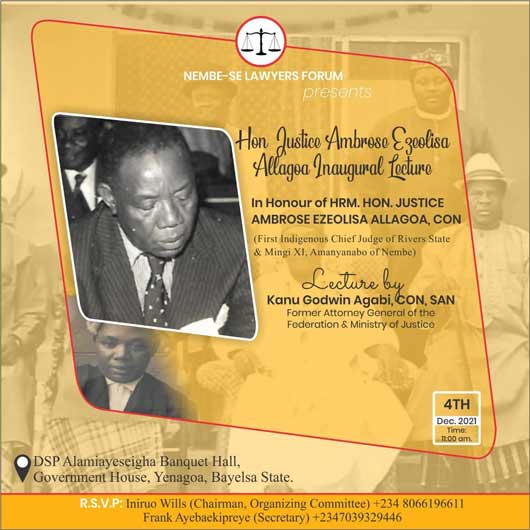 The lecture which is to be delivered by Kanu Godwin Agabi, CON, SAN (Former Attorney General of the Federation & Minister of Justice), is scheduled to hold on the 4th of December, 2021, at the DSP Alamiayeseigha Banquet Hall, Government House, Yenagoa, Bayelsa State.

The Nembe-se Lawyers Forum has marked the inaugural lecture to honour the Bench-man who in his lifetime, distinguished himself as an exceptional jurist of high repute. The forum is therefore calling on members of the legal community to join her in celebrating this legal icon.

His Royal Majesty Justice Ambrose Ezeolisa Allagoa MINGI the 11th was born on the 24th of August 1914 in Onitsha to the family of His Royal Majesty King Francis Ossomade Joseph Allagoa MINGI the 10th by one of his wives; Madam Nwaokiri Rose Onyeka. His father Francis Ossomade Joseph Allagoa (Amanyanabo of Nembe Kingdom, MINGI X) was the son of the rich influential merchant Queen – Omu Okwei of Ossomari Kingdom (in present day Delta state) and a princely merchant father of equal prominence; Chief Joseph Alagoa, (the grandson of KingBoy Amain MINGI the 5th Amanyanabo of Nembe Kingdom in present day Bayelsa State).

His Majesty commenced his educational career at St. Mary’s primary school from 1927 to 1932. He attended and was a pioneer student of Christ the King College (CKC) Onitsha 1933-1936; He obtained his Cambridge School Certificate and proceeded to the United Kingdom 1946 – 1949. Qualifying as a Barrister-at-Law with the Council of Legal Education, Lincoln’s Inn, London. He was just 35 years old. His choice for the legal profession may have been influenced by his father King F. O. J. Allagoa’s years in the judiciary before retirement.

He worked in the Federal Civil Service of Nigeria where he worked as a clerk in the judicial arm of government for a few years. His civil service career took him to Lagos where he served diligently as a clerk of court before proceeding for further studies in London.
As a lawyer, he commenced a brilliant legal practice in the city of Port Harcourt with his law firm Allagoa & Allagoa Legal Practitioners, (Our Lady of Fatima Chambers). He had a good career in the legal profession, representing clients such as J. T. Chanrai. He was elevated to the bench as a High Court Judge in 1962 by the then Eastern Nigerian Government until 1969. As a judge of the High Court of the Eastern Region of Nigeria, he presided in various judicial divisions like Abakaliki, Umuahia, etc. from 1963 to 1969. The creation of Rivers state by the administration of General Yakubu Gowon led to the transfer of His Highness to the newly created Rivers state where he was a judge from 1970 – 1975 before becoming the Chief Judge of Rivers state from 1976 – 1979. So dignified and diligent was his service that in 1976, he was appointed the first indigenous Chief Judge of Old Rivers state. And indeed the second Chief Judge since the creation of Rivers state. His Lordship Justice Ambrose Ezeolisa Allagoa is mostly remembered for the celebrated judgment in the famous Amakiri case where he exhibited rare courage in the award of damages in favour of the injured journalist Amakiri. Not minding the fact that the military executive arm of government had deep rooted interest in the case and its agents were the adversary in the case.
His rare courage towards seeing that justice was served was recognized and applauded not only in the country but also abroad. The City of Oklahoma, USA, demonstrated her pleasure at this classical demonstration of justice and fairness by awarding him;
“LIFE MAYOR OF OKLAHOMA CITY USA”

His Majesty Ambrose Ezeolisa Allagoa was deeply religious. A devout Catholic, he fully identified with the objectives of the Roman Catholic Church and was an excellent worthy knight of the Roman Catholic Church.
According to an oration presented by The Order Of the Knights of Saint Mulumba, KSM, Port Harcourt in honour of His Majesty the King: “We recall the crucial role he played as a Catholic in Rivers state at the end of the civil war. He assisted the Catholic Church immensely in identifying and recovering some of her properties at the end of the civil war in Rivers state. His full participation during the Corpus Christi procession, in spite of acute challenges of age, epitomized his commitment to the Catholic faith.” His Majesty introduced the Order of the Knight of St. Mulumba of Nigeria KSM in Rivers State in 1985, and eventually saw to its charter and subsequent inauguration on 26th September 1987 of the Port Harcourt Sub Council of the Order.

OTHER NOTABLE ACHIEVEMENTS OF HIS MAJESTY

His Majesty was crowned King and Amanyanabo of Nembe-Brass on the 31st of December 1976. His Majesty called on the shell development company operating at Nembe creek as well as the Federal and state governments to work in peaceful cooperation to build the long proposed road to Nembe and through it to other parts of the area.
Upon the creation of Bayelsa state out of the old River state in 1996, he contributed immensely to the success of the newly created state and moved to restore peace among coastal communities in the Niger Delta region.
Through His Majesty’s out stretched arms of friendship and networking, the Oba of Benin made a historic visit to Nembe during His Majesty’s reign as Amanyanabo of Nembe.

He was married to a beautiful woman Lady Francisca N. Allagoa JP and together they were blessed with children and grandchildren.

In 1978 a Commander of the Order of the Niger, CON a National honour.

On the 2nd of August 1972 by Governor Preston Smith as Honorary Citizen of Maryland USA.

Chairman of the Rivers state Council of Traditional Rulers.

Chairman Commission of Inquiry into the Organisation and Management and Running of the Rivers State College of Education 1976.

Trustee of the Port Harcourt Club 1928.

His Majesty King Ambrose Ezeolisa Allagoa loved golf as a sport and he passed away peacefully at the ripe age of 89 on the 17th of February, 2003.