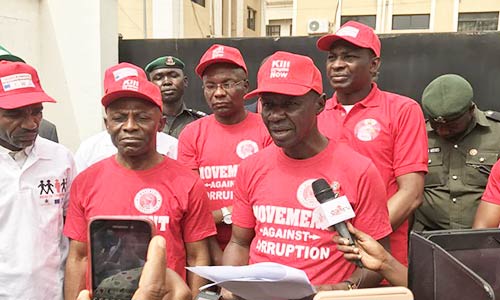 The Ilorin zonal office of the Economic and Financial Crimes Commission (EFCC) has handed over to the Kwara State Government the sum of N263 million allegedly stolen by and recovered from public officers.

Performing the official handing over of the cheque to Governor Abdulrahman Abdulrazaq at the EFCC Ilorin zonal office, the zonal head of the Commission, Mr Isyaku Sharu, said the money was part of the funds looted from the treasury of the state’s Internal Revenue Service as well as the 16 Local Government Areas in the state.

He said about N5 billion was allegedly stolen from Kwara Internal Revenue Service and shared in the ratio of 30 to 70 per cent among notable individuals in the state through their cronies.

Sharu explained that the EFCC was keeping track of the financial activities of all political officeholders.

He noted that the state government will be informed of any financial irregularities against any appointee to enable it to sanitise the system.

In his address, Kwara State Governor Abdulrahman Abdulrazaq expressed satisfaction with the level of successes recorded by the Commission in the state.

He said the achievements had vindicated both the Commission and the state government of the allegations of victimisation by the culprits.

The Governor said the state government will invest the funds into its new social investment programme, assuring that it will be utilised judiciously.