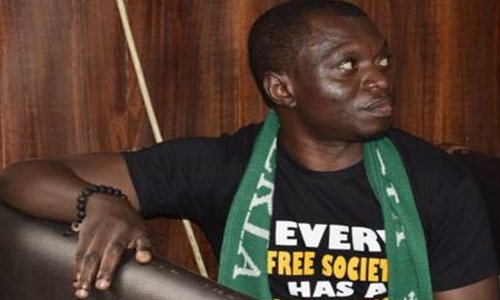 Agba Jalingo, a Nigerian journalist on trial for treason, has been granted bail by the court, after spending 174 days in detention in both the police cell and Calabar prison.

Mr Jalingo, the publisher of CrossRiverWatch, was arrested on August 22, 2019, over a report alleging that Cross River State governor, Ben Ayade, diverted N500 million belonging to the state.

The court asked that those standing as surety for the journalist must make a refundable deposit of N700,000 to court registry to perfect the bail.

Mr Jalingo was earlier denied bail twice by another judge, Simon Amobeda, who recently withdrew from the case after a secret recording where he (Amobeda) allegedly made some “biased” remarks against Mr Jalingo, was leaked to the press late last year.

Mr Amobeda is also a judge of the Federal High Court, Calabar.

Mr Jalingo’s case is prosecuted by the Cross River government which took over the case from the police. On the prosecution team were led the Attorney General of Cross River state, Tanko Ashang, and the Director of Public Prosecution in the state’s Ministry of Justice, Greg Okem.

Apart from Mr Ochinke, James Ibor appeared in court for the journalist.

He was not handcuffed, unlike some of his previous appearances in court.

Six other prison inmates were inside the van that brought him to court, they were guarded by an armed and two unarmed prisons officials.

The Nigerian government and the Cross River government have been under intense pressure from several groups globally to free Mr Jalingo who has been declared a prisoner of conscience by Amnesty International.

“We are concerned that Agba Jalingo’s trial falls short of international standards of fairness, especially because the court has allowed witnesses to be masked and the trial to be held in secret.

“The flawed charges and sham trial of Agba Jalingo have exposed the inadequacies and manipulation of the Nigerian criminal justice system and an unacceptable contempt for human rights and the rule of law,” Amnesty International said recently.

“Governor Ben Ayade of Cross River State and the government of President Muhammadu Buhari must stop filing bogus and politically motivated charges against critics and start listening to what they have to say.

“The case of Agba Jalingo is just one of many cases of blatant violations of the right to freedom of expression and media freedom in Cross River state and several parts of Nigeria. Joseph Odok was also unlawfully detained and later charged with terrorism solely for expressing critical opinion on social media.”