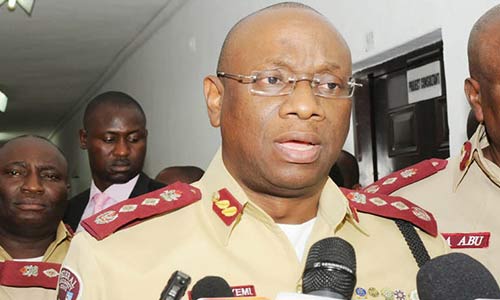 The Federal Road Safety Commission has deployed in different formations of the corps across the country, 36 senior officers who were recently promoted by the Corps Marshal, Dr Boboye Oyeyemi.

The corps stated that the redeployment was meant to ensure efficiency, dynamism and excellence in service delivery to the public.

The Corps Public Education Officer, Bisi Kazeem, who disclosed this in a statement in Abuja on Sunday, explained that Deputy Corps Marshal Julius Asom, who was formerly the Special Assistant to the Corps Marshal, is now the DCM in charge of Special Duties and External Relations.

Others are Assistant Corps Marshal Ayobami Omiyale, who was moved to the number plate production plant, Gwagwalada, from Zone RS1HQ Kaduna to RS4HQ Jos.

Meanwhile, ACM Oluwasusi Familoni has been dispatched to the national headquarters as officer in charge of the National Vehicle Inspection Scheme while ACM Angus Ibezim, who was the Sector Commander, Jigawa, heads the Manpower Development at the headquarters.

“In the same vein, erstwhile Sector Commander, Rivers State, ACM Edward Zamber, has been deployed as the Commandant FRSC Academy, Udi; ACM Ann Marjah is to take over as ACM Administration at the national headquarters.”