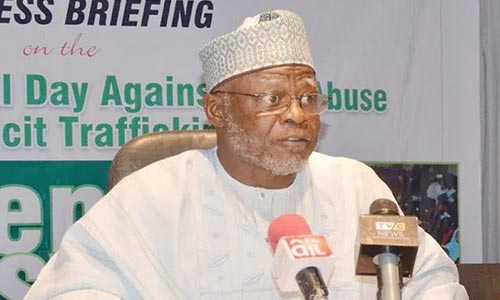 Indications were rife at the weekend that the Federal Govern­ment will inaugu­rate a presidential inves­tigative panel to probe alleged financial infrac­tions in the National Drug Law Enforcement Agency (NDLEA), under Col. Muhammad Musta­pha Abdallah (rtd), According to daily independent.

President Muham­madu Buhari has also approved the appoint­ment of former Military Administrator of Lagos and Borno States, Briga­dier General Mohammed Buba Marwa (rtd) as the new chairman of the agency.

The appointment takes immediate effect, as the new helmsman is expect­ed to assume office this week.

An ally of President Buhari, Marwa had worked assiduously as Chairman, Presidential Advisory Committee for the Elimination of Drug Abuse (PACEDA) be­tween 2018 and Decem­ber, 2020.

He, along with others, had developed a blue­print on how to end drug abuse in Nigeria.

Highly polished, in­tellectually deep and a pan-Nigerian, Marwa was once military at­taché, Nigerian Embas­sy, Washington DC, USA, and defence attaché, United Nations, New York, as well as former ambassador to South Af­rica and the Kingdoms of Lesotho and Swaziland.

These are in addition to his training in the Ni­gerian Military School and the Nigerian De­fence Academy (NDA), Kaduna.

Sunday Independent gathered that the immi­nent investigative panel would look into all the financial infractions at the NDLEA from Janu­ary 2016 to January 2021.

“The panel will inves­tigate any other matter that will make for the strengthening of the op­erations of the NDLEA and also make appropri­ate recommendations, including but not limited to restructuring of all af­fected departments and or disciplinary actions for all found culpable.

“It will look into all cases of gross miscon­duct involving all offi­cers and others that are contrary to the Public Service Rules and 1999 Constitution of the Fed­eral Republic of Nigeria as amended, and partic­ularly disobedience to Ministerial Directives and Federal Executive Council Decisions,” said a reliable source.

Another source at the paramilitary agency lamented the sad events of Abdallah’s last 48 hours in office, saying it further opened up a can of worms on how terrible the agency was misman­aged under his watch.

The source noted: “In a desperate attempt to cover up the financial misappropriation, in­discriminate awards of marks to candidates and unprecedented ma­nipulation, he blatantly disobeyed the directive of the Attorney General and Honourable Minis­ter of Justice, Abubakar Malami, to stay action on the recruitment exer­cise.”

It added that the incon­clusive recruitment by Abdallah did not follow the minimum selection standard in the agency.

“Also, the process con­travenes the principles of Federal Character. Usually a committee is constituted by drawing officers from Adminis­tration, Personnel and Training. However, Ab­dallah completely al­lowed such a sensitive process to be handled by a private firm.

“This is sad and unfor­tunate as requirements like age, height, certifi­cate and medical fitness were compromised.”

Another source lamented how the ND­LEA missed out under Abdallah from partic­ipating at the presti­gious National Institute for Policy and Strategic Studies (NIPSS) in Jos, Plateau State.

He said: “under Abdal­lah, the agency lost its slots and the aspirations of officers becoming Fel­lows of the Institute with their colleagues in the military and paramili­tary organisations were dashed by Abdallah’s re­fusal to pay the required course fees.”

A massive age falsifi­cation fraud and transfer of service manipulations by some very top ranking officers were also discov­ered in the agency.

While the age fraud was allegedly perpetrat­ed during the Federal Government’s shift to the Integrated Personnel Payroll Integration Sys­tem (IPPIS), the transfer of service manipulations were done at the point of entry.

“The scandal was blown open by a petition to the President. Conse­quently, Abdallah was di­rected by the Presidency to act accordingly.

“Unfortunately, be­cause the former Direc­tor of Administration and Finance, Mr. Yohan­na-Sila Mshelia, was involved with other di­rectors, Abdallah could not carry out a compre­hensive and non-biased investigation.

“Yohanna-Sila was employed on August 21, 1998 with a Bachelor of Law degree (LLB) on grade level 14. This was how most of the direc­tors were unduly elevat­ed contrary to the Civil Service regulations.

“Abdallah covered up for most of the directors affected in this scandal. In a display of selective justice, Abdallah only asked Dr. Opara Law­rence and Bala Fage to go on retirement.

“There are many top ranking officers that manipulated their ages as well as entry proce­dures under the guise of transfer of service that ought to have retired but are still in service. All such individuals must be shown the way out of the Agency,” our source lamented.

Sunday Independent also learnt that Abdallah stopped the payment of monthly running cost to commanders since 2016.

“His hobby is to collect foreign travel allowanc­es, even if there is no justification for the trip. When he could no longer travel out of the coun­try due to the COVID-19 pandemic, he started collecting money under the guise of local travels that never took place on monthly basis.

“An estimated N2.8 bil­lion monthly allocation to the agency is said to have been misappropri­ated by Abdallah during his tenure.”

It was learnt that Ab­dallah never released money for the funding of operational activities, and this had denied the agency of spectacular seizures leading to the dismantling of drug traf­ficking cartels.

However, Sunday In­dependent gathered the former chairman direct­ed the payment of opera­tional cost a day after he was asked to handover to the secretary, Shadrach Haruna, and backdated it for the month of Decem­ber 2020.

“Officers are in deep pain, frustration and dis­enchantment over their career stagnation. How do you expect an officer with three promotion ar­rears to be committed to the job?

“The NDLEA officer is one of the least paid among paramilitary per­sonnel in the country. There are no allowances to justify the hazards of the job.

“When officers are attacked or die on the line of duty, it is fellow officers that contribute from their meagre sala­ries in support of such colleagues.

“The most recent case is the Hung (Adamawa State) attack in October 2020 where an officer Samuel Abba was burnt to death and Tope Omopu was left in a critical state. Abdallah did noth­ing to the family of the dead and Tope Omopu that is battling for sur­vival. We are psycholog­ically tortured daily by the economic hardship confronting officers.

“Only N50, 000 was giv­en to families of three of­ficers, Onwumere Nich­olas, Peter Ebun and Abdulrahman Musa, who were shot dead in Kogi State on October 13, 2017, by gunmen. This is unbelievable.

“Even when the Edo State Command head­quarters in Benin City, Orlu in Imo and Nnewi in Anambra were destroyed during the #ENDSARS protest in October, 2020, Abdallah never visited the affected commands,” lamented another source.

The former chairman was also alleged to have sold the official quar­ters for the Chairman at George Street Ikoyi, Lagos.

He was also accused of selling part of the Shaw Road, Ikoyi Lagos prem­ises of the agency.

“This is a man who never acquired a proper­ty for the agency, yet he had the audacity to sell what he met. Major Gen­eral Musa Baimayi of blessed memory that is credited with acquiring property for the agency across the country nev­er sold one,” the source claimed.

Another officer said that the agency had suf­fered so much under Ab­dallah and the following steps should be taken to rectify the abnormali­ties.

“The Director of Ad­ministration should be separated from Finance. Finance directorate should be headed by a qualified financial ex­pert.

“There should be prop­er placement of officers to address the lack of promotion and low mo­rale.

“Provision of medical care to officers in seri­ous challenge like Tope Omopu that was recently attacked and others re­quiring intensive medi­cal attention.

“Fill Command ap­pointment vacancies and transfer officers and commanders that have overstayed in one beat.

“Investigation of age fraud and transfer of service by high ranking officers who manipulat­ed their ways to the top and be shown the way out. Improve the salary and provide operational logistics.

“Reversal of the sold Chairman Quarters and part of Shaw Road of­ficial premises. Resto­ration of the agency’s quota at National Insti­tute for Policy and Stra­tegic Studies NIPSS.

“Investigate the alle­gations of abnormali­ties regarding the Abdal­lah-led recruitment and conduct a fresh exercise by the agency staff there­by giving Nigerians a lev­el playing ground.

“Construction of State Command headquarters and Drug Rehabilitation centres across the coun­try, among others.

“There should be a comprehensive probe of Abdallah’s tenure and a change of key accounts personnel used in trans­ferring funds indiscrim­inately.”

Several futile attempts were made to speak with General Marwa at press time.