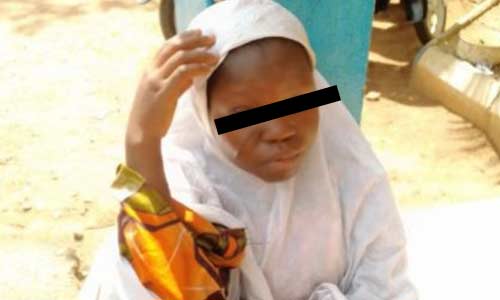 A 17 year old wife one Salma Hassan in Itas Gadau local government area of Bauchi state has allegedly killed her husband one Mohammed Mustapha for forcing her to have sex on their wedding night.

The suspect in an interview with newsmen at the state police headquarters Thursday shortly after she was paraded by the commissioner of police Philip Maku confessed to stabbing the late husband but not with the intent to kill him.

She claimed that her late husband approached her for sex and she told him that she did not like it because it is an act of ‘iskanci’ (indiscipline or immorality).

She said after she denied him sex due to her orientation that it is an immoral act to allow any man to sleep with her, he beat her up and as such, she stabbed him with a knife in revenge which resulted to his death.

“I married him because I loved him and he loved me too. But one night he wanted to force me to have sex and I told him that I don’t like it because I was told that it is ‘iskanci’ (Hausa word for immoral act).

“He therefore got vexed and beat me up. I took a knife and stabbed him not knowing that it would kill him. I never intended to kill him because I stabbed him gently. But he bled, rushed to hospital where he died”. She said.

But while addressing Journalists, the police commissioner said the girl is 18 years old and that she allegedly murdered her spouse on 24th April 2020 where his officers at Itas Gadau local government division arrested her and recovered a knife.

“On the 24th of April 2020 at about 9pm, one Haruna Musa of Itas Gadau reported at Itas Gadau division that one Salma Hassan, 18 years of the same address stabbed her husband one Mohammed Mustapha on the chest as a result, he sustained serious injury and was rushed to general hospital Itas Gadau for treatment where he was certified dead.

Aside from that, Maku said on 4th May 2020 at about 3: 39 pm, one Bashir Muktar of Dutsen Tanshi and five others at large attached to unity security hunters and patrol Nigeria limited Bauchi allegedly conspired, arrested and took one Abubakar Lawal of Kofar Dumi area in Bauchi to their office.

According to the police commissioner, the members of the vigilant group beat him until he became unconscious, sustained injuries as a result of which he sustained various degrees of injuries on his body that led to his death.

He said that they have been apprehended and that one stick and a rubber knife were recovered from the suspects.