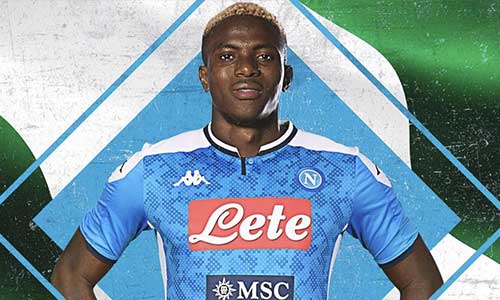 Nigeria forward, Victor Osimhen, has signed for Serie A side, Napoli, from French outfit, Lille, the two clubs announced on Friday.

Neither club officially gave details of the transfer, but a source from Lille who was familiar with the transfer told AFP that the Ligue 1 team would receive 70 million euros ($82.8 million) with add-ons potentially worth 10 million euros.

Italian media report, however, that Napoli have shelled out 50 million euros before add-ons.

Either figure would be a club-record transfer fee paid by Napoli.

Osimhen, 21, scored 18 times last season and was one of the revelations of France’s curtailed campaign.

He will wear the No.9 jersey at the Serie A side.

Also, U-17 World Cup winner Osimhen says he is ready for the new challenge at Napoli.

“Can’t wait to put on this iconic jersey, thank you for the warm welcome @sscnapoli #forzanapolisempre,” Osimhen tweeted.

Napoli goes into their final match of the season against Lazio knowing they will finish seventh in Serie A.

They have qualified for the group stage of the Europa League by virtue of winning the Italian Cup.