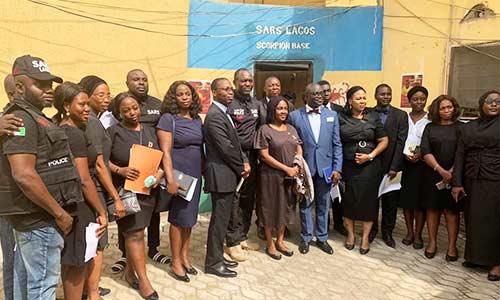 A prominent Senior Advocate of Nigeria, Mr. Kayode Enitan along with Mrs. Tola Ayanru (an Associate at SPA Ajibade & C) Counsel from OPD and other volunteers visited Special Anti Robbery Squad (SARs) Headquarters in Ikeja to inspect its detention facility

The visit is in line with sections 33 and 34 of the Administration of Criminal Justice Act 2015 which provides to the effect that a chief magistrate shall visit police detention centers to ensure that the rights of citizens are not violated.

The then Chief Judge of Lagos State, Hon. Justice Opeyemi Oke had in 2018 designated some magistrates in Lagos to undertake these visits. It was at the same time that the current Chairman of the Nigeria Bar Association, Mr. Bayo Akinlade Esq, convener of Fight Corruption in the Judiciary [FIACIJ] Founded a volunteer group now called DUTY SOLICITORS NETWORK [DSN] to accompany the Magistrates in their visits. Members of DSN include representatives of Legal Aid Council of Nigeria, Office of the Public Defender, CMC, NBA, FIDA and other NGOs.

The chief magistrate 1 of Ogba Magistrate Court was said to have ordered the immediate arraignment of more than 15 suspects found in the SARS detention facility or in the alternative they are to be granted bail.

TNL also learnt that there were a total of 25 suspects detained by SARs as they claimed that most of them were only brought in over the weekend.

These visits are complimented by the Police Duty Solicitors Scheme [PDSS] which many NBA Branches and even the ministry of justice in some states are adopting as an initiative to combat the the abuse of police powers and indiscriminate arrests.