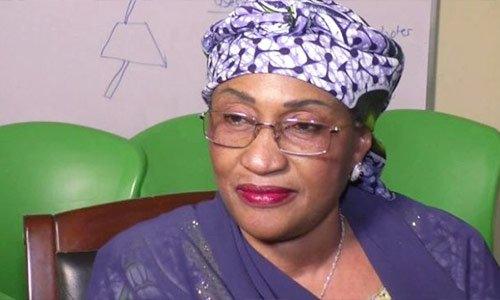 A former minister of Women Affairs and Social Development, Aisha-Jummai Alhassan, has died at the age of 61.

Suleiman Dantsoho, her former media aide, confirmed the death to our correspondent, saying she died at a Cairo hospital on Friday afternoon.

Late Senator Alhassan was born on September 16, 1959 in Jalingo, the Taraba State capital.

She was a lawyer by training and the first female Attorney-General and Commissioner for Justice in Taraba State.

She was also the first woman to be appointed as Secretary of the Federal Capital Territory (FCT) Judicial Council.

She later became the Chief Registrar of the FCT High Court on 17 December 2003.

She went into full time business and politics after her retirement from the FCT judiciary.

Fondly called ‘Mama Taraba”, she was a member of the 7th Senate between 2011 to 2015 on the platform of the Peoples Democratic Party (PDP).

She later decamped to the APC and was the governorship candidate of the party in the 2015 general elections in Taraba State but lost to the candidate of the Peoples Democratic Party (PDP) Governor Darius Ishaku.

She was appointed Minister of Women Affairs in 2015 by President Muhammadu Buhari, a post she resigned on July 27, 2018.

Aisha Jummai Al-Hassan popularly known as “Mama Taraba” is a distinguished Abusite and prominent Nigerian politician who is a former minister of women affairs and former Senator of the Federal Republic of Nigeria from Taraba North Senatorial District.

She was among the first set to do 4½ years in Secondary School because of the change of commencement of the school year from January to September.
She proceeded to the School of Basic Studies (SBS) Ahmadu Bello University (ABU) Zaria from July 1977 to July 1979 for her preliminary studies.

Hajia Aisha Jummai Al-Hassan Joined student politics at ABU Main Campus in 1977 when she was a little over 18 years. She Contested for the post of Vice President of the SUG in 1978. The first time by a non-undergraduate. Based on the informal political arrangement at this time, the position of Vice President was always reserved for women and winners always emerged un-opposed.

But it was different this time, 1978. For the first time, three female students contested for the position. A female student Elizabeth (Lizzy) Wambebe then an undergraduate studying Fine Arts and Lead Vocalist of ABU JAZZ Club was a strong contender. Also, for the first time too, a male undergraduate contested for the position.

Despite the fact that she was a prelim student and perceived by some to be an underdog, she won the election and became the Vice President and only female in the SUG Exco of that year (1978 – 1979) headed by Mal. Abdulhameed Imam, who was the president.

All members of SUGExco of that year except Aisha were undergraduates and males. During their tenure, there was a student crisis as a result of which some of the Exco members including the President were indicted and expelled from the University. As a result, Aisha Jummai Al-Hassan became the Acting President and completed the Tenure of Mal. Abdulhameed Imam.

During her days as an SBS ABU Student and Vice President/Acting President SUG Main Campus, she met her first husband and father of her three children, Professor Ango Abdullahi who was then the Deputy Vice-Chancellor, Ahmadu Bello University Zaria. He always represented the then Vice-Chancellor Prof. O. O. Akinkugbe at meetings with the SUG Exco.

She married Prof. Ango Abdullahi in September 1979 after completing her SBS when her husband was still the Deputy Vice-Chancellor. He became Vice-Chancellor three months after their marriage, in December 1979. Due to her new status as a wife and mother, she switched over from being a Science Student to Arts after her first baby (girl) in 1980.

That same year (1980), Aisha Jummai Al-Hassan enrolled for a Diploma in Law at Ahmadu Bello University Zaria. She had to start from the Diploma because of her pure science background. She was lacking the required Arts subjects to enroll for LLB. She proceeded to read LLB at the same ABU Zaria from October 1982 to June 1985. She went to the Nigerian Law School Lagos 1985 – 1986, was called to the Nigerian Bar in 1986 and did her NYSC 1986 – 1987.

AISHA JUMMAI AL-HASSAN’S CAREER
Aisha Jummai Al-Hassan Started work as a Magistrate Grade II in April 1988 in the Kaduna State Judiciary. Went for the Technical Aid Corps Programme of the Federal Ministry Of Foreign Affairs (on Secondment) to the Republic of Fiji from 1990 – 1992.

She was admitted to the Fijian Bar and enrolled as a Barrister and Solicitor of the High Court of Fiji in 1991. While she was in Fiji, her services were transferred from Kaduna State Judiciary to FCT Judiciary in 1991 as Magistrate Grade I.

She assumed duty at FCT Judiciary in 1992 when she returned from Fiji. At the time she assumed duty she was the only female Magistrate in the FCT. Aisha Jummai Al-Hassan rose through the ranks and became the first female Chief Magistrate in the FCT in 1996. She was then moved to Judicial Administration as the first female Deputy Chief Registrar and Director of Litigation, High Court of the FCT Abuja in 1997.

Aisha Jummai Al-Hassan was appointed the first female Attorney General of her State, Taraba in 1997. She Returned to FCT Judiciary after the handing over to a Democratically elected Government in May 1999 and continued in her office as Director Litigation. She was appointed the first female Secretary of the FCT Judicial Service Committee in November 2002.

She was appointed the first female Chief Registrar of the High Court of the FCT in December 2003. She voluntarily retired from the FCT Judiciary as Chief Registrar on the 31st of December, 2009.

Her family has always been a political family even before the time of her birth. Her father joined politics (NCNC) when he was a student at Barewa College Zaria. He later joined NPC in the First Republic. He was one of the conveners of NPC in Muri Division and was the first NPC Secretary of Muri Division.

He contested election under NPC in 1959 for the House of Representatives in one of the 3 Muri Division Constituencies. He was re-elected for the second term after 4 years but could not finish the term because of the coup in 1966.

HER POLITICAL CAREER
Aisha Jummai Al-Hassan joined the PDP as a member in the year 2005 while still working in the Judiciary but she was NOT politically active. She started active politics in October 2010 and immediately went to contest for the Senatorial seat of her Zone.

She won the election and was sworn in as Senator of the Federal Republic of Nigeria on 6th June 2011, the day the 7th Senate was inaugurated.

In the 9 April 2011 elections, Jummai won with 114,131 votes, followed by Jolly Nyame of the Action Congress of Nigeria (ACN) with 92,004 votes. She was one of four women elected on the PDP ticket, the others being Nkechi Nwaogu (Abia Central), Helen Esuene (Akwa Ibom South) and Nenadi Usman (Kaduna South). Following the election, she was said to have been in competition for the Senate President’s seat.

She contested for the position of governor of Taraba State under the APC’s ticket in 2015 lost. In November 2015, she was declared the winner of the April 2015 Taraba state gubernatorial election by the tribunal. The judgment was appealed and she subsequently lost the case.

She was appointed as the minister of women affairs by President Mohammadu Buhari in November 2015. Meanwhile, in a series of events leading up to the 2019 general elections, Aisha Jummai Al-Hassan resigned her ministerial position and membership of the ruling APC.

She was subsequently nominated as the gubernatorial candidate of the party and the contested the 2019 general election which she was lost.