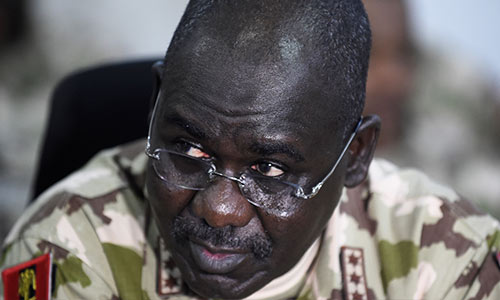 Chief of Army Staff, Lt.-Gen. Tukur Buratai, on Monday promised to remain in Katsina State until bandits are rooted out.

He told Governor Aminu Bello Masari that he would not leave “until the bandits terrorising the state are defeated”.

The army chief said the deteriorating security situation was of serious concern to President Muhammadu Buhari, who he said had directed that appropriate steps be taken to neutralise the marauders.

He explained that the new Operation Sahel Sanity was part of efforts to address the challenges.

Masari stressed that it required superior firepower to defeat the bandits.

The governor said military operations would not be successful without the people’s support.

“There are those in the communities that supply the bandits with information and supplies. They are equally guilty and are our enemies.

“It is not enough to continue to accuse the government and the military, but the people have a role to play because security is a collective responsibility.

“The blame game must end to defeat these bandits once and for all,” he said.

Scores of Boko Haram fighters were killed and their hideouts were destroyed in airstrikes conducted by the Air Task Force of the Operation Lafiya Dole at Warshale in Borno State, the Defence Headquarters (DHQ) said yesterday.

The air raid was executed under the Operation Long Reach, following intelligence that insurgents launched attacks on troops and surrounding communities from the area.

Defence Media Operations Coordinator Maj.-Gen. John Enenche said: “The Air Task Force (ATF) of Operation Lafiya Dole has dealt another decisive blow on Boko Haram Terrorists (BHTs) in the Northeast with the destruction of several of their structures and neutralisation of their fighters at Warshale in the northern part of Borno State.

“This was achieved through airstrikes executed on June 27, 2020, as part of subsidiary Operation Long Reach after credible intelligence reports as well as days of aerial surveillance missions established that the settlement was being used as a staging area to launch attacks against friendly forces’ locations and surrounding civilian settlements.”