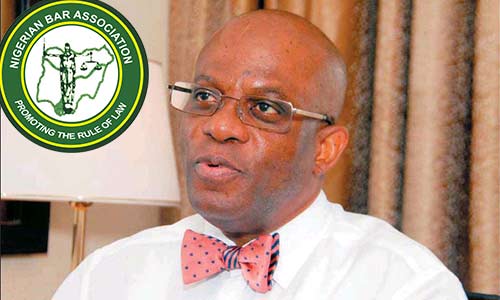 The Nigerian Bar Association (NBA) has made a clarification on the withdrawal of the invitation extended to the Governor of Kaduna State, Mallam Nasir El-Rufai, as a speaker at its 60th Annual General Conference slated for August, 26-29, 2020.

In a statement signed by the NBA President, Paul Usoro SAN) and made available to TheNigeriaLawyer (TNL), NBA said the dis-invitation of El-Rufai was not on ethnic or religious ground

Usoro said he has tendered his apology to the governor already through the Director General of the Nigerian Governors’ Forum, Mr. Asishana Okauru, regretting any embarrassment that the situation might have caused the governor.

1. At its meeting that was held yesterday, 20 August 2020, NEC took the decision to dis-invite HE Mallam Nasir el-Rufai as a Speaker in one of the Panel Sessions that is planned for the NBA 2020 AGC holding from 26-29 August 2020. This morning, I have had telephone discussions with the Director General of the Nigerian Governors’ Forum, Mr. Asishana Okauru, on the issue and have tendered through him, to HE Mallam Nasir el-Rufai, my sincere apologies and regrets for any unintended embarrassment that he may have been caused by the NBA NEC’s decision.

2. I followed up our telephone discussions with the attached letter which explains the circumstances of the decision by NEC. The letter has been sent to Mr. Okauru, both in hard and soft copies. It is apropos that I reproduce in this Release, paragraphs 5, 6 and 7 of the letter for ease of reference by our members:

“5. In concluding, I must clarify two critical issues. First, NEC’s decision yesterday had no ethnic or religious coloration or connotation howsoever and whatsoever. In discussing the issue at NEC, nobody talked about religion or ethnicity. As I recall, there were no more than 3 (three) advocates for retaining the invitation of the NBA to HE Nasir El-Rufai (not including me) and two of these three gentlemen are from the South of Nigeria and one is a reverend gentleman. Conversely, some of those who spoke against his attendance share the same faith with Mallam Nasir El-Rufai and some others come from the Northern part of Nigeria.

“6. The second point that I must clarify is that, NBA NEC, by its decision was not passing any judgment on Mallam Nasir El-Rufai. NBA NEC is not in a position to pass such judgments without having all the facts and hearing from all the sides and it did not set out to pass any such judgment. NEC merely made a judgment that it was not in the best interest of the Association to be engulfed in the controversy that trailed the invitation of Mallam el-Rufai for the Conference and that it was best if the safety-valve of dis-inviting the Governor was applied. Indeed, NEC did not howsoever or at all discuss the substance of the issues that have been raised against the Governor by the different groups and persons who clamored for his being dis-invited – and there was very considerable clamor in that regard. I perhaps need to mention that, prior to the NEC meeting I had personally taken urgent and strident steps, working with the TCCP, to douse the clamor, but we had no success.

“7. I truly would appreciate your bringing this letter to the attention not just of HE Nasir el-Rufai but also to all the other members of the esteemed Nigerian Governors’ Forum and in particular, the Chairman of the Forum, HE (Dr) Kayode Fayemi. Please, assure Their Excellencies that the Nigerian Bar Association holds all our Governors, including HE Nasir el-Rufai, in the highest esteem and would do nothing intentionally to embarrass them collectively or individually. Once again, I offer my sincere and deepest apologies and regrets for the unintended embarrassment that may have been caused to HE Nasir el-Rufai by the afore referenced decision of the NBA NEC and would appreciate your passing on my regrets and apologies to him personally.”

3. I draw attention to those paragraphs of my letter in particular in order to douse the ethnic and religious passions that seem to have been inflamed amongst our members by the NEC decision. I have received several messages from our members that have attributed ethnic and religious considerations to the decision. That is not correct and is very far from the truth. Neither the NBA nor NEC belong to any religious or ethnic group. We are lawyers and professionals dedicated to the ideals and the promotion and preservation of the Rule of Law and we belong to one indivisible family of the NBA.

4. Did NEC infringe the audi alteram partem principle – a cardinal principle of the Rule of the Law – by dis-inviting HE Mallam Nasir el-Rufai? No, it did not. As I point out in my letter, neither the NBA nor NEC set out to sit in judgment against Mallam el-Rufai and even from that prism, the principle of fair hearing does not apply. None of the persons or parties who are opposed to the invitation of Mallam elRufai to the AGC has been offered the NBA or AGC platform to advocate or propogate their viewpoints and positions and so, the principle of not hearing the other side does not arise.

5. Indeed, as at date, neither the NBA as a body nor NEC has interrogated the issues raised by persons who are opposed to HE el-Rufai’s invitation to the AGC and therefore the issues of fair hearing do not also arise. NBA is not even equipped to play that role of an arbiter or court in respect of the issues raised by persons opposed to HE el-Rufai’s invitation and has never pretended to be so equipped and/or mandated.

6. I am hoping that this Release would assist in clarifying issues for our members and placing the NEC decision in its correct perspective. I implore all our members to please not view this issue howsoever from an ethnic or religious perspective. Those were not the issues considered by NEC yesterday. We are one united Nigerian Bar Association with no religious or ethnic bias or predisposition and shall ever so remain.