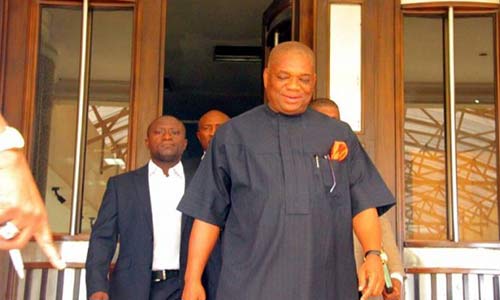 The Court of Appeal, Enugu Division, yesterday, dismissed the appeal filed by governorship candidate of the All Progressives Congress, APC, Okey Ezea, in the April 11 governorship election for lack of merit and competence.

Ezea filed a petition at the election tribunal sitting in Enugu challenging the declaration by Independent National Electoral Commission, INEC, of Governor Ifeanyi Ugwuanyi of the Peoples Democratic Party, PDP, as winner at the poll.

The tribunal upon hearing the submissions of the respondent’s counsel, struck out some paragraphs of the petition filed by Ezea on the grounds that they were imprecise, vague, related to party nomination and contained criminal allegations against people, who were not made parties to the petition. Consequently, Ezea filed an appeal at the Court of Appeal Enugu, challenging the tribunal’s decision.

In a unanimous judgment, which lasted for over an hour, the court held that the petitioners’ notice of appeal was not properly signed, adding that it flouted the fundamental requirement in law that a notice of appeal must be signed by an identified petitioner or his legal practitioner.

“The supposed election was nothing, but a sham. It was marred by electoral violence, intimidation, harassment, ballot box snatching and physical injuries to APC sympathisers by PDP thugs.”

Ezea had further alleged that Ugwuanyi and the PDP “imported more than 5,000 thugs into Enugu State, particularly in the Nsukka area” during the election, adding that INEC’s directive that voting should not take place in places, where result sheets were not available, was not complied with.

According to him, INEC officials sold result sheets to the PDP. “At the end of the day, we found out that the result sheets were actually sold out before the election. INEC sold more than half of the Permanent Voter’s Cards, PVCs, in Enugu State to the PDP,” he added.