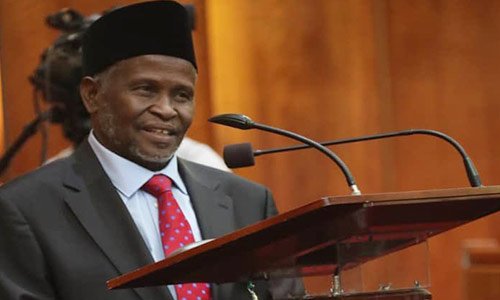 The newly confirmed Chief Justice of Nigeria, Justice Ibrahim Tanko Muhammad, raised vital issues affecting the judiciary at his confirmation hearing before the Senate last Wednesday. He succeeded in outlining some of the tasks before him as he takes over as the head of the nation’sjudiciary.

At the confirmation hearing, Justice Muhammad harped on the problem of corruption in the judiciary. He said, “I always say that the Nigerian judiciary is part and parcel of Nigeria.Therefore, I am not surprised if I see some justices are corrupt. But such judges who are corrupt should be identified and prosecuted under our laws. Now, the most worrisome of this trend is at the lower ebb of our judiciary. For those of us who know the Area Courts and Magistrate Courts, this is where the real problem arises.”

Though the newly sworn-in CJN argued that the lower courts are most guilty of corrupt practices, many Nigerians have the impression that the judiciary as a whole need to the cleansed. For instance, the immediate past CJN Walter Onnoghen resigned from the top job under circumstances related to alleged acts of corruption. In this dispensation, several judges faced prosecution over alleged corrupt practices. If Justice Mohammed considers the fight against corruption as one of his cardinal objectives, such fight should be holistic, not restricted to lower courts.

In the same vein, the judiciary is perceived as a clog in the wheel of justice in high profile cases relating to corruption. Anti-corruption agencies, especially the Economic and Financial Crimes Commission (EFCC) and the Independent Corrupt Practices and Other Related Offences Commission (ICPC) have complained that cases involving politically-exposed persons are unnecessarily delayed in courts.

While petty thieves and common criminals are quickly sentenced to years of imprisonment, cases involving former governors, ministers and directors-general of government agencies, who illegally helped themselves with public funds, linger on for decades, some on account of technicalities. If this country must succeed in the fight against corruption, Justice Tanko should devise means to rein in the judiciary in the all-important fight.

It is also important for the National Judicial Commission [NJC] to be decisive in handling allegations of corruption against judicial officers. On many occasions, when cases are taken before NJC, they are handled in a neither-cold-nor-hot style, giving the public the impression that the judiciary is reluctant to ensure justice when one of their own is found wanting. This attitude has to change. Investigations into allegations against any judicial officer should be carried out with dispatch, and justice must be seen to have been done without fear or favour. It is due to the supposed reluctance of NJC to take steps against judicial officers that the executive has clamped down of judges in recent times.

There is need to ensure the independence of the judiciary at every level. Justice Tanko alluded to this when he appeared before the Senate. He said, “What is keeping the judiciary aback is the lack of autonomy. We are not asking for anything more than what is provided in the budget. Believe me, if you go to some states you will find out that the judiciary is refused even the normal monthly grant. The Federation will allocate something to you through the Ministry or department, but things are not as they used to be.

It is, therefore, I think, the duty, the responsibility of the legislature at the national level and at the state level to see that we touch these places so that you close all the ends where people may get corrupted.”

The legislature should support the judiciary in its quest to be truly independent, especially from executive meddling and financial strangulation.As long as judicial officers go cap-in-hand to the executive to beg for what they are entitled to, it will be difficult for them to be dispassionate and independent in carrying out their duties.