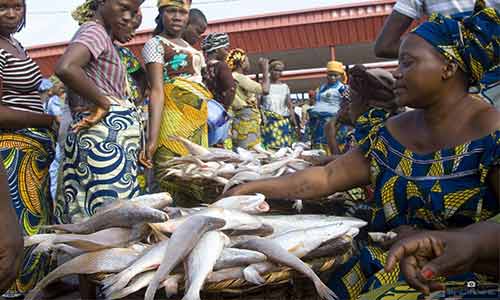 Fish retailers have accused a multinational firm Conakry Industrielle Et Commerciale (CIC), an offshoot of SICOM Group, of allegedly breaching the Local Content Law and depriving them their means of livelihood.

They alleged that the firm had, contrary to Nigerian law, engaged in retail sales of fish, an act they alleged was threatening the welfare of Nigerians.

In a petition to the Lagos State House of Assembly, the retailers called for an enquiry into the alleged harmful trade practice by the firm.

The petition which was signed by an activist, Comrade Buna Ishaq, alleged that the firm’s involvement in retail was competing with middlemen who had been off-takers of its product, thereby putting their means of livelihood in jeopardy as Nigerian businessmen in the sector were being replaced by imported ones.

“This is nothing but a combination of economic exploitation and colonisation of the Nigerian market in areas that are envisaged as exclusive preserve of Nigerians going by the Local Content Act 2010 as enacted by the National Assembly.

“We write your hallowed chamber owing to the centrality of Lagos State in the entire fish and fisheries industry (first as port of landing/destination), and also because Lagos State stands to be at the receiving end of the social vices which this threat to the livelihood of many Nigerians would eventually unleash as more homes are driven into poverty.

“Needless to say, this matter requires your utmost attention and swift intervention as Nigerians are being short-changed from both ends; Nigerian businessmen who have hitherto provided CIC Ltd with its working capital through pre-paid arrangement for supply of goods are driven out, while CIC Ltd makes excess profit through its direct participation at the retailing level.

“The implications for the Nigerian economy and Nigerians in the sector are dire and will eventually de-empower, de-tool and swell up the ranks of the unemployed in Nigeria with a corresponding loss of household incomes.

“The direct consequences of this are more hungry homes and the accentuation of social crimes and unrest. It is already resulting in sudden collateral loss/damage and a ruination of investments put in place by these businessmen some of which include debt from bank loans, gradual collapse of facilities such as cold rooms, vans and other facilities with which the sector was hitherto engaged.

“Thirdly, it is a tactical way of off-loading the labour of the importing country; the hijack of the sector by foreigners and the simultaneous disenfranchisement of Nigerians from the industry. It is a systematic way of crowding out the incomes of Nigerian households from the sector and the externalisation of the gains in the industry even to the last layer –retailing.

“It is an affront and a breach of the Local Content Act 2010 which prohibits the importation of goods that can be locally sourced, or services within the capacity and competence of indigenous businesses.

“To be specific, the concerned area –retailing- being ventured into by CIC Ltd falls entirely within the capacity and competence of Nigerians and it is a disparagement of our laws (especially the Local Content Act 2010) and an insult to the intelligence of the institutions behind their enactment which include the three arms of government and their agencies…”

When contacted by journalists, the Sales Manager for CIC Limited Ali Hassan Saade directed them to get in touch with the company’s lawyer, Rose Ama for reaction, but she didn’t take her calls.