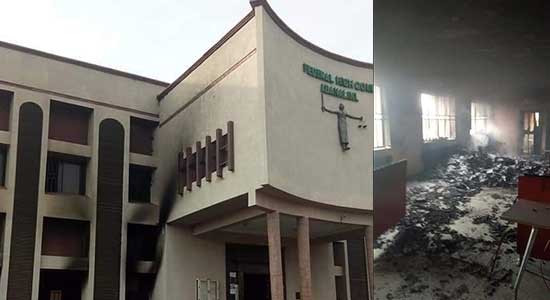 The premises of the Federal High Court in Abakaliki was in the early hours of Tuesday set ablaze by yet to be identified hoodlums.

The Police Public Relations Officer (PPRO) of Ebonyi, Mrs. Loveth Odah, who confirmed the incident to the News Agency of Nigeria (NAN), said that no arrest had been made.

She, however, said that the command had begun an investigation to unmask those behind the attack with a view to bringing them to justice.

“Hoodlums in the early hours of Tuesday wielding dangerous weapons stormed the federal high court premises and burnt part of the building.

“Though no arrest has been made, but investigation is ongoing.

“The Commissioner of Police, Mr Aliyu Garba, has promised to arrest the perpetrators and bring them to justice,” Odah said.

Meanwhile, a detachment of the Nigerian Mobile Police (MOPOL) has been drafted to the area to secure the court premises.

No casualty was recorded in the attack but it was understood that court records in the Library were completely destroyed.

The building is located along the Enugu/Abakaliki Highway opposite the state People’s Democratic Party (PDP) State office.

A source told our correspondent that the attack was carried out by hoodlums using firebombs.

However, firefighters were said to have been later mobilised to the scene and helped to put the fire out before it could cause further damage.