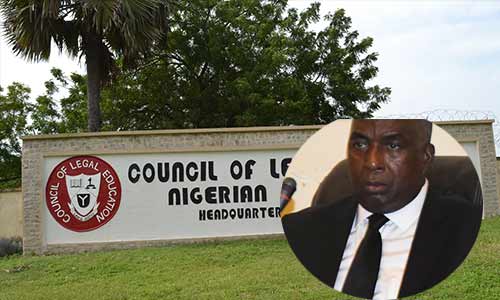 The Management of the Nigerian Law School has issued a press release urging members of the public to disregard as false and a misrepresentation, allegations in the media going around that there is a fraud in the Nigerian Law School based on the appearance of the Director-General , Prof. Isa Chiroma, SAN before the Senate Committee on Public Accounts (SPAC).

This is contained in a statement signed by the Secretary to the Council & Director of Administration, Mrs. E.O Max-Uba which was made available to TheNigeriaLawyer.

Besides, the statement noted that the appearance of its DG is sequel to the annual report of the Auditor General of the Federation on the Accounts of various MDAs.

Furthermore, it specifically stated that there were five queries against the Director General from the Auditor General in which due explanations were furnished.

Specifically reacting to the query on paying about 34 million to members of staff as cleaning allowance, it noted that same was not a personal cost and not to individuals, stating that documentary evidence exists to back the assertions.

Furthermore, on allegations of paying about 35 million as dressing allowance without the approval of National Salaries, Income and Wages Commission (NSIWC), it noted that this payment are in consonance with the traditional work ethics of the profession and therefore, the scheme is in line with the Council’s condition of service.

TheNigeriaLawyer recalls that there have been several allegations making around that there exists fraud in the Nigerian Law School sequel to the 2015 Auditor-General’s report submitted to the Senate Committee on Public Account.

RE: MEDIA MISREPRESENTATION OF AUDITOR-GENERAL OF THE FEDERATION’S REPORT ON THE NIGERIAN LAW SCHOOL

The attention of the Management of the Nigerian Law School has been drawn to a lot of misleading media reports arising from the  appearance of its Director-General, Prof Isa Chiroma, SAN at a public hearing conducted by the Senate Committee on Public Accounts (SPAC) on Thursday 2nd July, 2020 . The appearance was in connection with the annual report of the Auditor-General of the Federation on the Accounts of  various ministries, departments and agencies (MDAs) of the Federal Government of Nigeria for the year ended 31st December, 2015.

Whilst the institution would not ordinarily join issues or respond to such misleading publications, it has become necessary by Management to make some clarifications as most sections of the media have deliberately misrepresented the issues raised at the public hearing.

The facts are that five (5) queries  were raised by the Auditor-General and the requisite explanations were proffered by the management  as outlined below:

EXPLANATION: The payments were not personnel cost and so did not require the approval  of NSIWC. These were overhead cost items for telephone bills, toiletries, cleaning and related items. The payments were on mandates into individual bank accounts of staff and not to a single person. The documents evidencing these payments are still available.

EXPLANATION: The Council of Legal Education traditionally  has a dress code for its staff and students as part of its work ethics. In  furtherance of this tradition , the Council approved a Scheme and Condition of Service on March 10, 2009 that provides in part,  the payment of 10% dressing allowance to its staff.

The payments were made into the individual bank accounts of staff and not to a single person as erroneously reported.

Members of the public are hereby assured that there is no fraud in the accounts of Nigerian Law School as reported. The management of the School will appear before the Senate Committee this week to clear the other queries raised by the Auditor-General.

Mrs. E.O. Max-Uba
Secretary to the Council and Director of Administration