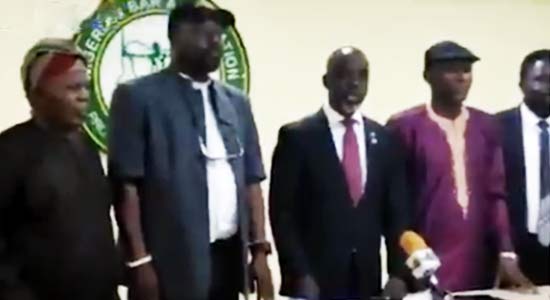 The Nigerian Bar Association (NBA) has engaged the Leadership of the Judiciary Staff Union of Nigeria (JUSUN) in an emergency meeting geared towards resolving the industrial action embarked upon by members of the Union.
The NBA delegation was led by the first vice National President Mr. John Aikpokpo-Martins who represented the president Mr. Olumide Apkata who was unavoidably absent.

At the meeting, the NBA reiterated the importance of the Judiciary in the stability of the Country while decrying the non-involvement of the NBA in the meeting held by JUSUN before embarking on the industrial action which has crippled Judicial activities across the country.

The NBA urged JUSUN Executive to engage them in their negotiation with the Nigerian Governor’s Forum in a bid to end the lingering Industrial Action.

The following were the resolutions reached at the meeting:
1. JUSUN should suspend its ongoing strike for Federal Courts System as Federal Government has granted financial autonomy to Federal Judiciary.
2. State JUSUN should continue with the industrial action while engaging the Nigerian Governor’s Forum, The Nigerian Bar Association in their negotiation and possible consensus to grant Financial Autonomy to State Judiciary.

The Leadership of JUSUN who were present at the meeting are: The Deputy Vice President, The Vice President and the General Secretary was led by the National Treasurer Comrade Musa Jimoh Alonge who represented the president Comrade Marwan Mustapha.

On suspending the ongoing strike for Federal Judicial Workers, Comrade Alonge said their decision would be made known at their next National Executive Council Meeting.

You would recall that THENIGERIALAWYER earlier reported that JUSUN embarked on strike on the 6th of April to drive home Financial Autonomy for State Judiciary which is guaranteed by the Constitution Federal Republic of Nigeria 1999 as amended and ordered by the President.