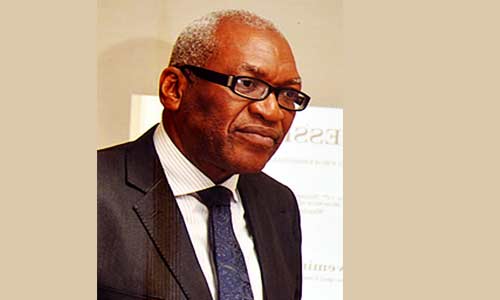 The Senior Advocate of Nigeria and former Attorney General of Ogun State, Mr. Oluwemimo Ogunde, SAN in a statement which was made available to TheNigeriaLawyer(TNL), has disclosed his reasons why he decides to support Dr. Ajibade SAN in the forthcoming Nigerian Bar Association(NBA) National Elections, as opposed to the consensus candidate that was adopted by Southwest Lawyers Forum (Egbe Amofin Odua) and the Ikeja Branch NBA which produced Mr. Dele Adesina SAN.

It would be recalled that the Egbe Amofin has in its decision at a general meeting on 14th day of December 2019 unanimously endorsed Mr. Dele Adesina SAN in which the NBA Ikeja Branch also adopted him.

However, Mr. Ogunde SAN disclosed that he won’t be supporting the consensus candidate adopted by these bodies wherein he belonged. According to him:

“I had always declared my support for a candidate contesting any NBA elective position by voting for him. For the first time, I am going to support a presidential candidate by doing more than just voting. The candidate is NOT the candidate adopted by the Egbe Amofin Oodua or the NBA, Ikeja Branch to which I have belonged since 1984. To be fair, all the presidential candidates are my friends. I believe all of them are eminently qualified to lead the NBA. However, the Egbe Amofin Oodua has adopted a candidate. Why am I not supporting him, particularly when I say he is my friend and a suitable candidate?”

Besides, Mr. Ogunde, SAN noted that his challenging decision to go against this consensus candidate may only be known to Lawyers of Yoruba origin.

“I have another challenge, which may be known to only Yoruba lawyers. I am Chief Hubert Ogunde’s son, who has come to be identified with the promotion of Yoruba unity. Being his son, I may be accused of opposing Yoruba solidarity, by my taking a stand that appears to be different from what a body that seeks to advance the interests of Yoruba lawyers has directed.” He said.

“I cannot deny that I am a Yoruba lawyer. However, my views about regional or ethnic association of lawyers remain with me and they may not necessarily be the same as the general view. I do not believe I need to reveal or discuss them in explaining why I took a stand different from that of the Egbe. However, I am quick to state that I am NOT a “tribalist” in the way we understand that idea in Nigeria, neither was my father. The song, “Yoruba Ronu” was written to deal with an internal Yoruba problem which to him, bothered on treachery. Even in that instance, he took a STAND that was not acceptable to the Government of the day and his family suffered for it, including me.” He added.

Meanwhile, stating the real reason why he has decided to support Dr. Ajibade, he bluntly disclosed that he was the first candidate that approached him for support and he had given him his words. According to him:

“Of all the presidential candidates, the candidate I now stand with was the first to approach me and solicit my support.

“He shared with me his vision for a more professional and prosperous Bar, particularly a Bar that would promote the general interest of the your lawyers beyond just giving them an “NBA Young Lawyers Forum”. On my belief that these ideals are not just campaign promises, borne out of my own discreet due diligence, I pledged my support. I have always had ideas on how to make the NBA render useful, profitable and permanent help for our teeming young lawyers, particularly those who are seven years or younger at the Bar. I believe that a victory for him would give me an opportunity to revolutionise the way our young lawyers perceive themselves and the Bar. My choice stands on these twin pillars.” He said.

Furthermore, he noted that it would be perfidious to abandon whom he had pledged his support for because of the new development necessitating the adoption of a new candidate by the bodies he belongs.

“In our culture as Yorubas, we don’t attack or antagonise our elders in public. I cannot then use this forum to comment on the decision taken by the Egbe to adopt a candidate. My views shall remain with me or would be expressed if our elders need my opinion. All I would say is that the decision to adopt a candidate came LONG AFTER I had committed myself to one who was NOT adopted. It would be perfidious, to say the least, to abandon him just because the Egbe did not adopt him. I was not brought up with such values. I pray my candidate wins. I will support him to the end. If he does not win, so be it. There will be no regrets. One candidate must win and another must lose.” He said.

In addition, he enjoined that notwithstanding the differences in opinions as regards the candidate chosen by anyone, everyone should be entitled to exercise their right to vote in accordance with his conscience and their should be tolerance of dissents. According to him:

“It’s a pity that the decision of the Egbe has now engendered some unfortunate consequences. Even Yorubas are now quarrelling among themselves. In the South-west, lawyers who are honest enough to dissent have been subjected to unnecessary verbal attacks. I do not know what would happen to me for expressing this view. I am of the view that we should be tolerant of dissent. As Hegel said, it is the thesis and the antithesis that produces a synthesis. My appeal is that all of us must respect the right to freedom of thought and conscience. I hope my appeal would be heeded. We are all members of the same fraternity and whoever emerges as President must meet a National Bar that is tolerant of opposing views.”