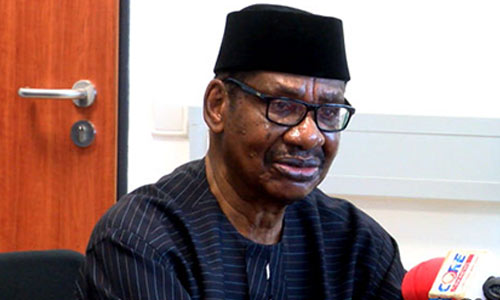 *‘Judges’ entitlements not reviewed for 15 years’

An eminent professor of law Itse Sagay (SAN) has accused the judiciary of being hostile to the anti-graft war.

He said such a judiciary would always find a technical excuse for setting justice aside.

Sagay, who chairs the Presidential Advisory Committee Against Corruption (PACAC), said the Supreme Court had become “notorious” for such judgments.

Independent Corrupt Practices and Other Related Offences Commission (ICPC) Chairman Prof Bolaji Owasanoye said if judgments are seen to undermine the pursuit of justice, it could lead to impunity.

He, however, said the judiciary alone should not be blamed, as the prosecution has a role to play in ensuring justice is done.

A Court of Appeal Justice, Joseph Oyewole, said the Judiciary had delivered several judgments that strengthened the anti-graft war.

They spoke at a virtual forum to mark the Fourth African Union (AU) Day of Anti-Corruption, with the theme: Fighting corruption through effective and efficient judicial system. It was oganised by PACAC in collaboration with others.

Sagay faulted the judiciary’s role in the fight against corruption.

He said: “We have a very serious problem. Can we say that all the judges have integrity? I don’t think so, because in my view, missing in action in this fight against corruption is the Judiciary.

“I consider the Nigerian judiciary hostile to the anti-corruption war. They have been indulging and insisting on technical judgments contrary to the justice of the case.

“Nigeria is a common law country. Since 1873, the common law introduced the doctrine that where there is a clash between law and equity, meaning between technicality and justice, equity, that is justice, must prevail. This is a major aspect of our law.

The PACAC chairman cited the judgments on the Zamfara and Bayelsa states governorship election cases as examples of where the Supreme Court did an injustice.

He also referred to the May 8 order for the retrial of Ude Jones Udeogu, a former Director of Finance in the Abia State Government House, who was convicted along with former Governor Orji Uzor Kalu for “looting” N7.65billion.

Sagay said: “The electorate vote to install a party in government, and the Supreme Court votes to set aside this exercise of a democratic right and then installs a party that had lost the election woefully, thereby completely turning our democracy upside down.

“Only recently, we all witnessed how a judgment of a high court convicted high profile politicians for corruption only for the Supreme Court to set it aside because, according to them, as at the time the judge gave the judgment, he had been promoted to the Court of Appeal.

“This is in spite of the fact that an Act of the National Assembly specifically empowers a promoted judge to complete his part-heard criminal matters in the high court.

“These are just a few samples of judicial hostility to the fight against corruption. So, the problem is not the efficiency of the judicial system.

“Everything has been done to eliminate inefficiency and ineffectiveness in the administration of justice in this country through the Administration of Criminal Justice Act (ACJA) 2015. The problem is human – the judicial officers, not the system.

“If you change their orientation to justice, then, definitely, corruption will be dealt a deadly blow. So we need to beg the Judiciary for a change of heart, otherwise, the war against corruption will continue to meet a brick wall when it gets to the very last stage – the judicial stage.

“A judiciary that is hostile will always find a technical excuse for setting aside justice to the detriment of the whole country in the fight against corruption.

“Let me emphasise that not all judges are playing this role, but there is a significant number doing that, and the Supreme Court has become notorious for this type of judgment.

“I want all judges who are upright to forgive me if I have said anything that they feel unhappy about. We acknowledge and support you and will promote your work.

“But we must tackle those that are bringing down the administration of justice in this country, which is a major stumbling block to the fight against corruption.”

The professor of law said the Federal Government has made significant strides in the fight against corruption, especially in the conviction of about 3,000 people and recovery of over N1trillion looted funds.

He urged the National Assembly to speed up the enactment of the Proceeds of Crime Act and the Special Criminal Court Act.

Prof Owasanoye emphasised that adjudication is at the root of prosecution and that the judiciary is not immune to the effects of corruption.

He said strong consideration should be given to the creation of special courts, which he believes will help to stop cases from dragging on for 12 years or more, during which evidence or witnesses could disappear or die, at the end of which the perception will be that corruption pays “if you know how to play your game”.

The ICPC Chairman said an effective judicial system means decisions must serve the cause of justice and advance the growth and development of society.

He added: “Those decisions must give citizens a sense of security and of justice and invoke in them a feeling of patriotism and commitment and a willingness to promote the good of all.

“If judicial decisions are seen in any manner to undermine the pursuit of justice, it will lead to a high level of impunity. But this is not to say that Judiciary is the only one at fault.

“I will admit as head of an anti-corruption agency that if we do not do our work effectively, we cannot present credible cases before the courts, and the courts will adjudicate based on what is before them.

“We had great expectations that the ACJA roadmap would lead us to a more efficient justice system. But as we have seen from a number of decisions, all the expectations are not being met.

“Some of the decisions seem to be sending stakeholders back to the drawing board, and sometimes you then need to ask yourself: what can we do better?

“To fix these defects is the duty of everybody, not only just the judiciary,” Owasanoye said.

“Reading the Udeogu decision, a constitutional provision cannot be set aside or overridden by a statutory provision.

“It only means that advocacy should shift to the National Assembly to ensure that the provision is reflected in the Constitution.”

The Justice said having an effective judiciary also means ensuring that members of the bench are well remunerated.

“In 2006, I and some other judges were in South Africa on training. And we had an interactive session with the leadership of the South African judiciary.

“The Chief Judge said they had never had any incidences of corruption. I was amazed. He said as the Chief Judge of South Africa, he was the highest-paid public servant.

“If we do not pay attention to welfare, remuneration, accommodation, working tools and retirement package of judges, we would not strengthen integrity in that sector. We need to raise the stakes.

“A judge in South Africa, after serving for 10 years, for instance, earns the salary for life. Thereafter, the surviving spouse continues to earn that same salary for the rest of his or her life.

“In Nigeria, salaries of judges and the entire entitlements have not been reviewed for over 15 years. It is something that we should address,” he said.

Justice Oyewole suggested that there should be one level of appeal in governorship elections, as it is in the presidential election.

He said there should be a constitutional amendment to remove the two-tier appeal in governorship polls.

“Every election in this country should stay at one level of appeal,” he suggested.

He called for accountability in the judiciary.

“The judiciary should know that accountability is very essential. For the judiciary to effectively play its role, it must like Caesar’s wife be above every form of blemish.

“The ability of the judge to effectively deliver on his adjudicatory mandate is not always a matter of erudition or industry.

“More often than not, it boils down to his ability to withstand pressures and do justice according to the law and peculiar facts of the case.

“Judicial integrity is, therefore, fundamental and whatever goes towards strengthening it must be courted and cultivated,” Justice Oyewole added.