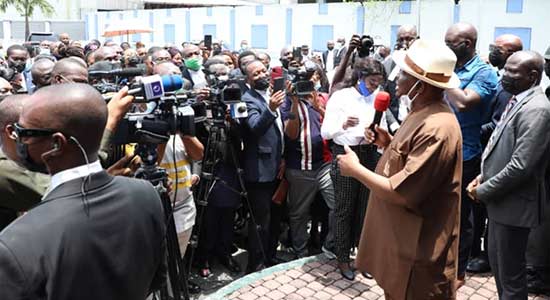 The Nigerian Bar Association Branches across the country Thursday visited the governors of their respective states as a solidarity for the ongoing strike of the Judiciary Staff Union of Nigeria, JUSUN.

Recall that JUSUN, on April 6 embarked on an industrial action, shutting down courts across the nation, demanding judicial independence following which the national president of NBA, Olumide Akpata, directed that all NBA Branches should meet the governors of their respective states.

NBA Ikeja Branch was seen on Monday with placards lawyers led by the Chairman, Bartholomew Aguebodo, who took off from Ikeja Bar Centre and marched through Oba Akinjobi, into Obafemi Awolowo Way towards Alausa secretariat.

Meanwhile, our correspondent learned that four of the NBA Branches in the state, namely Lagos, Ikorodu, Epe, and Badagry have agreed to pay a “visit” to the Governors’ office on Tuesday in line with the directive from the NBA President, Olumide Akpata.

The Oyo NBA comprising of the Ibadan, Oyo, Saki, and Ogbomoso branch chairmen, the executives, and senior members of the bar converged on the secretariat with a jointly written demand to request that the state government should ensure full compliance with existing legislative instruments and court judgments on the financial autonomy of the Judiciary. The lawyers visited the Ministry of Justice where they were told the Attorney General and Commissioner of Justice was not around and they dropped a copy of their letter, the same was done at the House of Assembly and the High Court Complex at Ring Road.

On the other hand, the NBA Benue Branch recorded success in their visit to the Benue State Governor, Samuel Ortom who said his administration is in full support of autonomy for Judiciary and Legislative Arms of Government. He stated that autonomy for the two arms of government is allowed under the constitution and as someone who has respect for the Rule of Law, he would prefer that monies meant for the Judiciary and Legislature be deducted at source. Governor Ortom noted that a framework to that effect was being worked out, expressing the belief that when the process is completed, Nigerian Governors would also key into it.

The position was sour in Rivers State as Governor Nyesom Wike threatened to stop the implementation of financial Autonomy for the judicial arm of government in the State should court workers and their union refuses to call off the strike in the state.

Governor Wike said this after the NBA Chairman in Port Harcourt commended him for his total support to the Judicial arm in the state and also pride it as the best among all states in Nigeria. The governor in his response said the strike in the state is absolutely useless and encouraged the NBA members to continue as long as they have the strength to do so.

He said, “if you (NBA) commend this administration for our support for the Judiciary and implementing the Financial Autonomy, what then is the use of the strike in the state?”.

In a related development, hundreds of lawyers from the five branches of the Nigerian Bar Association, (NBA) in Edo State, were barred by security agents from gaining access to the Government in order to submit their letter to Governor Godwin Obaseki calling for financial autonomy for the judiciary. The NBA members, led by the Chairman, Benin Branch, Pius Oiwoh, were drawn from the Igarra, Auchi, Uromi and Ekpoma branches of the union. After waiting for over one hour, the lawyers matched to Edo State Council Secretariat of the Nigeria Union of Journalists, NUJ, where Oiwoh told journalists that their visit to government house was on the directive of the National President of the NBA, Olumide Akpata, who hails from Edo State, that they should present their letter of appeal to the governor to grant financial autonomy to the judiciary.

It was good news in Delta state as government of the state said no effort would be spared in the full implementation of financial autonomy of the judiciary. The State Attorney General and Commissioner for Justice, Mr. Peter Mrakpor (SAN) stated it on behalf of Governor Ifeanyi Okowa while addressing members of the Nigerian Bar Association (NBA), Judicial Staff Union of Nigeria (JUSUN) and Parliamentary Staff Association of Nigeria (PASAN) who staged a peaceful protest to Government House, Asaba.

Mr. Mrakpor said that the bill for financial autonomy of the judiciary was passed into law in the state in March 2020, stressing that the state government has put the autonomy request in the first line charge in the Internally Generated Revenue of the state. He assured the protesters that all grey areas for full implementation was on course and urged them to remain peaceful and law abiding in pressing home their demands.

Also, Senior members of the Nigerian Bar Association (NBA) have also aired their voice by asking President Muhammadu Buhari to invoke Executive Order 10 against state governors as a way of compelling them to respect the nation’s constitution and the rule of law on Separation of Powers.

The Senior Advocates of Nigeria on Monday in Abuja lambasted the state governors over their alleged disregard of the Supreme law of the country. At a briefing to formally endorse the indefinite nationwide strike by the Judiciary workers, the senior lawyers praised the federal government for allowing separation of powers among the three arms of the government at the federal level.

Joe Gadzama and Yakubu Maikyau both Senior Advocates, who addressed the media condemned state governors for their alleged deliberate refusal to obey and protect the constitution as it relates to the separation of powers at the state level and urged President Buhari to bring them to the right track.

The senior lawyers had earlier blocked the entrance of the National Assembly in their bid to take their protest against the non-implementation of financial autonomy of the Judiciary to the leadership of the senate.

The protesting lawyers led by the first Vice President of the NBA, Mr John Aikpokpo-Martins, however, stood at the entrance of the National Assembly for over three hours insisting there would be no entry nor exit until they were allowed in. Aikpkpo-Martins said they were on a mission because it tallies with the NBA motto which is promoting the rule of law and independence of the Judiciary.