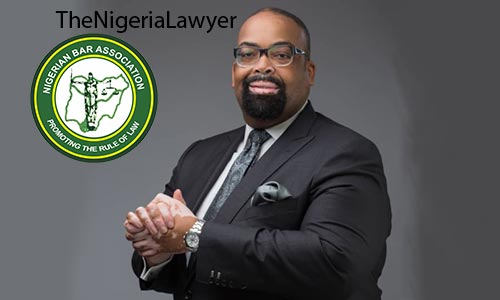 Finally, the Nigerian Bar Association (NBA) has ushered in a new leadership to steer the affairs of the Association for the next two years.

This is coming after the election conducted by the Electoral Committee of the Nigerian Bar Association (ECNBA) had been duly concluded as scheduled.

Meanwhile, the election result which was announced by the Chairman of the ECNBA Tawo.E. Tawo, SAN shows as follows:

For the office of the President, Olumide Akpata won with a total of 9,892 votes (54.3%) defeating Julius Oladele Adeshina, SAN and Dr. Babatubde Ajibade, SAN, FCIARB who polled 3,982 and 4,328 votes respectively.

However, for the office of Treasurer, Mercy, Ijato Agada emerged unopposed who scored 15, 488 votes.

However, after the declaration of results by ECNBA, Aderemi Oguntoye on behalf of Olumide Akpata thanked the ECNBA for the job well done. Also, ThankGod Enahoro, on behalf of Dr. Ajibade, SAN equally thanked the ECNBA and stated that he would communicate to his principal on way forward and appropriate scrutiny. Besides, Hauwa Shekarau, NBA Abuja Chair, who stood as an election observer on behalf of NBA Women’s Forum expressed her delight in the process and stated that it is gratifying to note that the election is trackable by everyone but however, she stated that there is need for improvement in the subsequent process having regards to the lessons learnt from the just concluded elections.

Meanwhile, while speaking at the NBA Headquarters in Abuja with supporters, Mr. Olumide Akpata expresses his appreciation for being voted in and assured that by the grace of God, transformational leadership would be witnessed in his administration

“We would look back to this day with gratitude. We would thank God we have produced this same person. We would never regret this day.”

“And the Bar will work for all” He concluded.