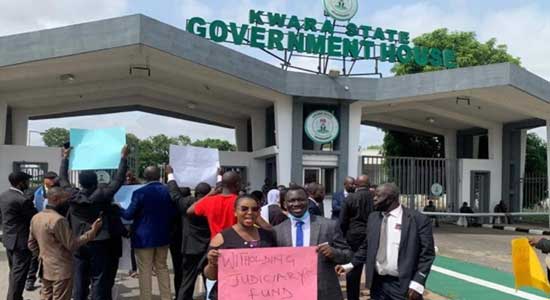 Lawyers in Kwara State, under the auspices of the Nigerian Bar Association, on Wednesday staged a peaceful demonstration in Ilorin, to support the call for financial autonomy for the judiciary in the state.

The peaceful demonstration came barely two weeks after the Judiciary Staff Union of Nigeria embarked on an indefinite strike over the lack of financial autonomy for the judiciary at the state level.

The lawyers who carried placards with various inscriptions marched to the Government House along Ahmadu Bello Way, Ilorin with the aim of submitting a letter to Governor AbdulRahman AbdulRazaq on the full implementation of financial autonomy for the judiciary.

The inscriptions on some of the placards read, ‘Judiciary is the last hope of the common man. Respect it!’; ‘Court judgement on financial autonomy must be complied with’; ‘The independence of the judiciary is sacrosanct’; ‘Respect for the judiciary is respect for the rule of law’; ‘O to ge Governors, obey and respect the law’; ‘Stop pocketing the judiciary’ and ‘Our constitution is meant to be obeyed.’

The Chairman, Ilorin branch of the NBA, Abdulganiyu Bello, who led members on the peaceful protest told The Punch that they were not allowed to see the governor.

He said, “We were at the Government House today but we could not drop the letter which we want to deliver to the governor and there was no one assigned to receive the letter on his behalf.”

Bello, however, decried the attitude of the governors to the financial autonomy of the judiciary in their respective states.

He challenged the governors to respect the rule of law and give effect to the independence of the judiciary arm of the government.

Bello, who noted that the 2014 court verdict had settled the controversy over the financial autonomy of the judiciary, explained that democracy would thrive with strict adherence to the rule of law.

He maintained that the industrial action of JUSUN had stalled court proceedings nationwide with its attendant effects on members of the bench and the bar.

“We are here in compliance with the directive of the National Secretariat as given by the National President, Mr Olumide Akpata, on the need for the government to give effect to the financial autonomy for our judiciary. That is why we are here to call on the governor to obey the rule of law.

“It is stated in our constitution, if you look at Section 121; it says that all funding shall be handed over to the heads of the judiciary in various states. So, we want to call on the governors to obey the rule of law. If the rule of law is obeyed, democracy will strive well. That is why we are here to register our support to JUSUN.

“The strike embarked upon by JUSUN has affected court proceedings, and you can see a lot of things happening to people. If you want to assert your right, you go to court. As it is now, courts are closed. We want to call on the governments to act on this so that we will all have a free society as required”, he added.