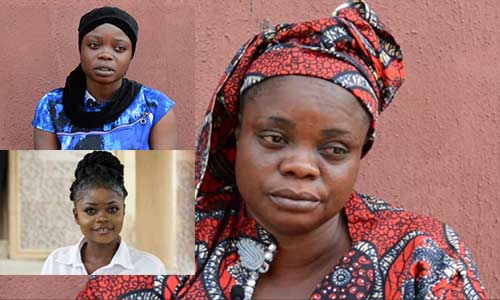 Kudirat Rafiu, the mother of Olabisi Onabanjo University graduate, Motunrayo Rufai, who was Kidnapped on her way to Law School, Abuja, has said that she used the money meant for her daughter’s school fees to pay her ransom.

Motunrayo was abducted at Kabba, Kogi State by men she claimed were Fulani Herdsmen

In an interview with Punch, the OOU Graduate mother said she had to borrow more money in order to be able to pay the one million Naira demanded by her daughter’s abductors.

She narrated that “it was those operating in the park, who got the motor vehicle for us. It was one of the vehicles, who use the park regularly and we saw passengers in the vehicle. When she got to Kabba, I called her and she informed me that the vehicle had arrived Kabba and I said ‘Okay’

“My phone rang and I heard my daughter’s voice. She said ‘mummy it’s me Happiness. I have been abducted by Kidnappers.’ I exclaimed, ‘kidnapped… What!’

“Immediately, the phone was taken from her, that they would collect 5 million naira ransom. However, we concluded on one million.

“When we paid, we paid the sum of one million naira which would have been her law school tuition fees and we also borrowed money.

“There was an old man, among those Kidnapped. He said that he paid two million naira. They collected his computer and about three phones. They beat him and injured him.

She said “On my way to the Law School, Abuja Campus, I was Kidnapped by Fulani Herdsmen. I woke up around 6 to get a boss from Atogere because that is the safest and nearest place I can and that is where everybody takes bus to Abuja

“At Kabba now Fulani herdsmen came out putting on uniform and they started shooting, they matched us in the wilderness, we started walking all about, then we get to a place we met some of them, they rear cows. They kept on saying Oga welcome and they started speaking their language, they brought rice for them. After eating we started the journey again. They said we should pay thirty thirty million and I started shouting. After some days they reduced it back to five million

“Throughout the six days I used there, there was no water, no food and we are so lucky to get water and it would be from them, the remaining of the water they took, we just had to take it like that.

“They now do us like the cows they rear. They released two people: one Fulani man (an old man) and one other guy for free without collecting any money. They even gave them transport fare of about two thousand naira.

“One man even paid for about two days before, it was in front of us they shared the money. They didn’t release the man because they said if they should, people will know about it, then they will be able to locate them.

“It was after we all paid they now said you, you will (I mean me) they are not releasing me, I am going to Nassarawa with them, stuffs like that, I just started crying, hearing that alone.