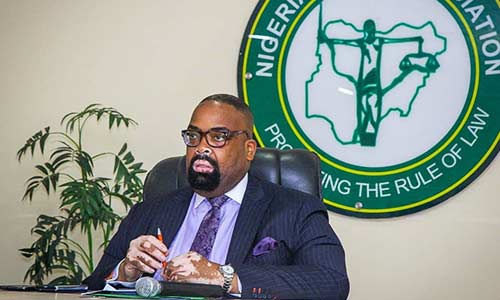 The striking judiciary workers will today Thursday, hold a meeting with the Nigerian Bar Association under the leadership of Olumide Akpata.

According to the National Publicity Secretary of the NBA, Dr. Rapulu Nduka, the JUSUN will be meeting with the president today, on the issue of strike.

The JUSUN had embarked on the strike in protest against the denial of the judicial arm of government it’s financial autonomy granted it in the Nigerian Constitution and affirmed by a January 2014 judgment of the Federal High Court in Abuja.

JUSUN had gone ahead with the strike which enters its third day on Thursday, despite Monday’s appeal by the NBA to the union to shelve the strike for the sake of the justice administration system which the lawyers’ association said was still in the recovery phase following the COVID-19 constraints.

TheNigerialawyer (TNL) reported Wednesday that the seeming aloofness of major stakeholders like the federal and state governments, and the NBA, could prolong the strike, similar to the three weeks long strike JUSUN embarked on January 2015.

The National Treasurer of JUSUN, Jimoh Musa, who is acting on behalf of the JUSUN president, Marwan Adamu as gathered confirmed that NBA invited them for a meeting today, in Abuja.

He said, “I have been informed by our secretariat that the NBA president, Olumide Akpata, reached out yesterday (Wednesday) seeking to meet with us (JUSUN) today.

“It was agreed that the meeting will hold in Abuja at about 1 p.m. today.”

The meeting with the NBA is expected to be held with a larger number of JUSUN officials, following the Tuesday meeting which only a handful of the union leaders attended with the Chief Justice of Nigeria (CJN), Tanko Muhammad.

TheNigerialawyer reported that Mr Musa led the delegation of JUSUN officials to the meeting with the CJN who appealed for the strike to the suspended to enable the government to meet the workers’ demand.

Mr Musa had, in response, informed the CJN that members of the delegation were not enough to reach a decision and promised to table his appeal at a meeting of the National Executive Committee (NEC) of the union.

JUSUN is also likely to meet with state governors as disclosed by Musa, although details of that meeting were yet to be concluded at the time of this report.

Musa said the secretariat of the Nigeria Governors’ Forum (NGF) reached out to JUSUN late Wednesday and a meeting with the representatives of the governors was being planned.

The crisis is not likely to be resolved without the active input of the governors, who are the main target of the workers’ strike.

The union’s grievances are less against the federal government which has been complying with limited financial autonomy for the judiciary, by placing the federal judiciary in the first line charge of the budget.

What is left to be achieved at the federal level is for the judiciary to be able to send its budget to the National Assembly for passage without a prior tinkering by the executive arm of government.

At the state level, the judiciary is totally at the mercy of the governors who only release money to the chief judge of the various states as they please.