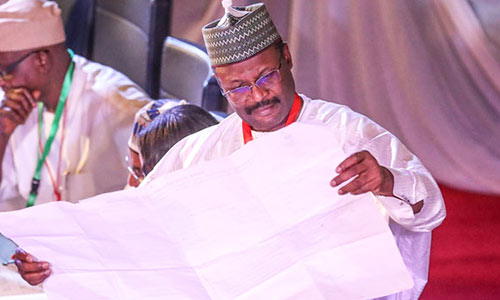 The Chairman of the Independent National Electoral Commission, Prof Mahmood Yakubu, on Tuesday disclosed that courts had so far overruled the results of primary elections conducted by political parties in 22 constituencies ahead of the 2019 general elections.

He said while the commission had obeyed some of the court orders and issued certificates of return to those declared winners by the courts, more of such judgments had been received and were under consideration.

Yakubu stated these in Abuja when the Bayelsa State Deputy Governor, John Jonah, led some stakeholders from the state to pay him a courtesy visit and to request a change in date of the state governorship election scheduled for November 2.

The INEC boss also disclosed that the prosecution of electoral offenders arrested during the last general elections would soon start.

He said, “The commission is committed to a free, fair and credible process. We will adhere to our guidelines and regulations and ensure a transparent and prompt collation and declaration of results.

“Arising from the arrests made by the security agencies in the 2019 general elections, the commission will soon commence the prosecution of offenders whose case files have been prepared by the Nigeria Police.”

Jonah had hinged the demand for a change in the date of the governorship election on the fact that the exercise would clash with the state’s annual thanksgiving service.

The thanksgiving service, according to the deputy governor, has the backing of the law and has been going on for the past seven years.

While responding, Yakubu said the “appeal will be examined and the commission’s decision will be announced by Friday this week.”

He appealed to all political parties to ensure the conduct of transparent, credible and rancour-free primaries for the nomination of candidates.

He added, “May I also appeal to all political parties to ensure the conduct of transparent, credible and rancour-free primaries for the nomination of candidates.

From the 2019 general elections, we have seen how acrimonious party primaries have been, resulting in numerous litigation and making our preparations for elections difficult.

“We are still grappling with issues arising from the conduct of party primaries. Pre-election litigation through the regular courts (the High Courts, Courts of Appeal and the Supreme Court) have resulted in a number of judgments in favour of petitioners.

“So far, primary elections conducted by political parties in 22 constituencies across the federation have been upturned by the regular courts of law on account of improper party primaries.

“In all cases, we have obeyed the orders of court and issued certificates of return to candidates declared winners by the courts. More of such judgments have been received and are currently under consideration by the commission.”

Yakubu appealed to all stakeholders in Bayelsa and Kogi states to ensure that the forthcoming governorship elections were devoid of hate speech, intimidation of voters and INEC officials, vote buying, and violence among others.