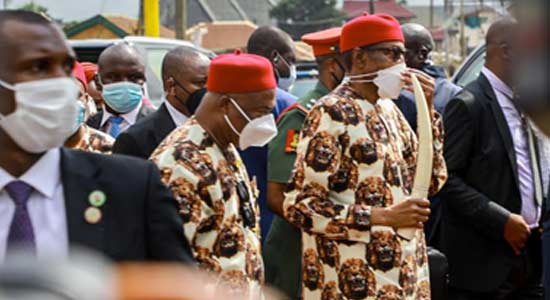 When presidents make state visits, there’s always a fanfare of drums, iron clatters; a flourish of trumpets; a tumultuous crowd of flag-waving, and patriotic people eager to welcome them and show them some love.

I’m not sure what Muhammadu Buhari, president of Nigeria was looking for, the previous week in Owerri, but that was not what he got.

He did not get some love. He got empty streets. There was not much of a crowd. The people all over the South East had stayed in their homes. President Buhari was free to come to the Igbo heartland, but the Igbo universe was indifferent.

Now, you cannot beat that for organized civic action. First of all, the president arrived in very ill-fitting clothing.

That was the beginning of the public relations faux-pax. Buhari is normally a well-turned man. No one has ever accused him of a lack of sartorial sense. If anything, his clothes sit well on him. He likes them well-made. But not this one.

Whoever sewed this “bespoke clothing” for the president’s visit, seemed to really, deliberately, want to stick it to the president, literally.

So came the man, looking haggard; like he needed to give his trousers a good bit of pressing on the ironing board. Then, there was no crowd of people to welcome the president to Owerri.

No. Just a handful of rented party members; and the APC does not have a lot of those in Imo State, and a laughable crowd of resident Hausa and Fulani folks living in Imo State, who were hurriedly recruited, and were niggardly in their appearance, but who was called, “Imo Youth.” If those are Imo youths, then Hope Uzodinma deserves to be in jail, because he must have reduced the Imo youth to flotsam.

That haggard-looking lot was certainly, for as long as they lived in Imo State, no doubt “Imo youth.” But the real Imo youth were in their homes playing checkers or chess, or watching TV, and generally ignoring the circus of a presidential visit. Word had gone round the East, that no man or woman should come out to the streets on Wednesday to welcome Buhari to Owerri.

There was full compliance. Shops were locked. Businesses stayed closed. People, including civil servants, took the day off. It was a brazen act of civil disobedience and non-violent protest.

The question everybody kept asking was: what is Muhammadu Buhari coming to do in Imo State? This heartland of the Igbo is at the core of the political opposition to Buhari.

These were the Igbo whom he has ignored for six years of his presidential office. These are the Igbo whose youth he has selectively killed in a campaign of state terror using the military and the police for simply demanding political inclusion or peaceful secession.

This is Igbo land of the IPOB which is intent on seceding from Nigeria, and whose activities became heightened under this administration as a result of Buhari’s policies of exclusion, nepotism, and a ruthless enforcement of tribalism. The Igbo of the South – whether in the South East or in the South-South, were opposed to Buhari, and have remained uncompromisingly opposed to him on very justifiable grounds. First, the Igbo are a cosmopolitan people.

They do not do well with religious bigots. They prefer tolerant, cosmopolitan types. They assessed Buhari thoroughly, and understood that he would be bad for everything the Igbo stood for in Nigeria: economic progress; political freedom; individual liberty; equality of citizenship, social and economic justice; religious tolerance – a society founded on merit; a humane social order; fairness; an accommodation of difference; broadly shared prosperity; industry; thrift; competitive and equitable federalism, and so on.

The Igbo do not understand, nor would want to justify a society where women could be stripped publicly and flogged just simply for voicing dissent.

They don’t understand cutting off a man’s hand because he stole a fowl. They’d rather carry such a man round the market square and make him do the public dance of shame, or at worse, put him before a jury of his peers where he’d be appropriately fined. But not lopping off his head or his limb.

The Igbo want to be governed under the Common law of the republic, which grants people the charter of fundamental Human rights, not under the Sharia law, which tells a man whether or not to drink alcohol or pray or not pray with precise regularity.

Buhari was always an advocate of the Sharia and was very openly intolerant of what he conceived as the “kaffir” culture of the South; particularly the excess and ungovernability associated with the kind of daring individualism which the Igbo have come to model. Besides, Buhari is a Fulani man – the type, and not all Fulani are guilty of this – who believes the great commission to “dip the Koran in the sea.”

The Igbo have always associated Buhari with that kind of irredentism, and openly rejected him, every time he presented himself for a national election.

Even when he was running with Igbo Vice-Presidential candidates. The vast number of the Igbo think they had “figured out” Muhammadu Buhari, even with all his attempts at Taqiyya – the doctrine of dissimulation and deception –just to lull the infidel into a false sense of security and partnership.

He could not deceive the Igbo voter who did not trust him and chose repeatedly not to vote for him because they discerned that he would be bad for Nigeria.

The Igbo became that 5% from Buhari’s political arithmetic of whom he would, he said openly, not treated as equal stakeholders in his administration. But events have also proved the Igbo right. Buhari has been bad for Nigeria.

In less than six years he destroyed the economy, and upturned all the progress that was made in sixty years of slow nation-building. Nigeria is in a free fall. It has never been under a worse kind of siege. It is suffering from economic blight. Nigerians have never felt more insecure in the history of the nation.

There is so much mistrust between Nigerians from one end to the other as a result of Buhari’s policies and political actions. So, what was he doing in Owerri on Wednesday, in one of his rarest state visits since his presidency? Well, the point everyone seems to be missing is that Buhari came to Owerri to see for himself how his mission to consolidate his power in what he imagines to be his ongoing “conquest” of the Igbo is panning out under one of his specially appointed proconsuls. His visit was not a gesture of goodwill and friendship.

It seemed though that this visit was hurriedly planned and even more hurriedly executed. The evidence is in the clothes. But more practically, it seemed that Mr Hope Uzodinma, the “supreme court governor” of Imo State, one of Buhari’s only two key allies in the South-East that includes David Umahi of Ebonyi, had to quickly find something symbolic and grand for Buhari to quickly commission while he was visiting. Well, they looked around, found nothing more than a gutter for the Nigerian president to commission in Owerri. It is called the balloon technology erosion control tunnel. It is a worthless piece of Engineering for a great city like Owerri.

Then again was the road which Buhari “commissioned”: a hurriedly graded, short section of an uncompleted road project from the previous administration. In short, everything Buhari was supposed to have “commissioned” in Owerri was a scam.

Pictures even showed increasing problems of flooding in that city a day to Buhari’s visit, even as emergency road workers laboured to pour tar on the section of the road to be commissioned for photo-ops. In any case, Buhari came and went. Two things became immediately clear to the President, and that is if it was not already clear to him before he came to the heartland of the Igbo nation: the East is in a revolutionary ferment.

Without prompting, citizens of these areas sat out the president’s visit at home, in spite of the threats by the state governors about the consequences of staying at home while the president visited. It shows something profound and powerful: the people are taking back their power slowly.

The governor imposed on Imo State has no legitimacy, nor authority, and carries little weight among Imo people. They do not listen to him. His party is a deadweight in Imo State, in the entire South-East and South-South, and wherever the Igbo have electoral strength.

President Buhari remains unpopular among the Igbo. IPOB speaks the true mind of the people. Until someone convinces the Igbo to believe again in a just, united, and equitable Nigeria, the minds of an increasing majority of the Igbo is made up: they want out of Nigeria.

They also know who their leaders are: Igbo leadership is certainly not in the geriatric gathering that received Buhari in Owerri. Those are paperweights in Igbo land prodded by “federal might.” They have no battalions. Igbo leaders are those who could say to the Igbo: do not go out today, and the Igbo, normally stubborn and individuated, complies without complaint.

I think Buhari felt that vibe in Owerri when he said in his speech at his reception, “Thank you, governor Uzodinma…but I will be very careful before accepting your invitations in future…” It was clear to Buhari at that moment that his “conquest” of the East is not as simple as getting a proxy Supreme Court to impose an unelected governor on a very sophisticated people. They may not fight Hope Uzodinma with guns.

They will defy him with ideas and with a symbolic action. That’s what Buhari’s visit to Owerri has made even clearer.