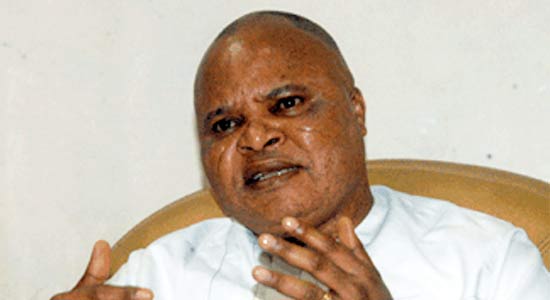 The newly-incorporated Nigeria National Petroleum Company (NNPC) Limited, on Monday failed to halt the hearing in a N100 billion suit instituted against President Muhammadu Buhari over alleged unlawful removal as Board Chairman, just as two senior lawyers representing the oil company in the suit withdrew from the proceedings.

Hearing in the matter filed by Senator Ifeanyi Ararume at the Federal High Court, Abuja had been stalled on two previous occasions by the NNPC.

The plaintiff, Senator Ifeanyi Ararume, had instituted a N100 billion suit against President Buhari, over his alleged unlawful removal as non-executive chairman of the newly-incorporated NNPC Limited.

Besides President Buhari, the NNPC Limited and the Corporate Affairs Commission (CAC) are second and third defendants respectively.

Instituted only about three months ago, Ekwo J. was intent on hearing the matter today. So, despite arguments to the contrary by counsel on behalf of NNPCL, Prof. konyin Ajayi SAN, ruled he would hear the substantive case along with a number of other applications including (1) a motion of stay of proceedings pending appeal against his earlier ruling refusing to hear preliminary objections to the case by the three defendants on the action being statute barred and the court having no jurisdiction; (2) an application for interrogatories so NNPCL could file its defence; and (3) a motion to set down  points of law for hearing before the substantive case based on lack of cause of action, and abuse of process.

In an attempt to start with the motion for stay of proceedings, Ararume, represented by Chris Uche [SAN] claimed that the motion for a stay of proceeding had not been served on him. The court asked Chief Uche SAN to be served in Court, upon which chief Uche SAN said he was ready to take the application on points of law.  Ekwo j.  however refused to take the application insisting on taking it along with the substantive case. Professor Ajayi stood his ground to move the application separately, saying the Judge must give separate rulings on it one way or the other before any other issue.

Upon insistence on going on, the Professor of law who led a retinue of lawyers on behalf of the NNPCL, including E. Uwa SAN, then sought directions on the interrogatories. Again the court refused to allow arguments on it.

Prof Ajayi then drew attention to supreme decision ruling that interrogatories must be heard before trial so as not to deprive the party of fair hearing.  Ajayi made the point NNPCL could not argue it’s case on the merits without being afforded the opportunity to do so. When Ekwo J. still refused, Prof Ajayi them sought leave of court to leave on the ground that he could not defend a suit where the defence is not allowed to be put in.

Ekwo J did not object and Ajayi & team then bowed and left the Court, which then heard counsel for Araruame who urged the Court to grant all the prayers.

Later during the proceedings, Ararume’s Counsel, Uche, while adopting his final brief of argument, urged the court to invoke the Companies and Allied Matters Act (CAMA) to nullify the removal of his client as the Chairman of the NNPCL.

Uche informed the Court that President Muhammadu Buhari acted outside the law to remove Ararume after incorporating the oil company in his name and was billed for inauguration in the capacity.

While CAC and the President’s counsel adopted their papers and urged the court to dismiss the action on ground of jurisdiction and being statute barred. The court deemed NNPCL as having adopted its papers and adjourned for ruling in March 2023.

However, President Buhari’s counsel, Abubakar Shuaib, prayed the court to dismiss the suit against his client on the grounds that it was statute-barred at the time it was instituted.

Specifically, Shuaib argued that Ararume’s suit offended Section 2(a) of the Public Officers Act and as such was incompetent.

On his part, Akeem Mustapha SAN, counsel to the Corporate Affairs Commission [CAC] which is the third defendant in the suit asked the court to decline jurisdiction to entertain the suit.

The Senior lawyer argued that his client did not play any role in Ararume’s disputed removal apart from incorporating NNPCL as a limited liability company based on the document submitted to it.

Mustapha, however, said that Ararume’s appointment was political and that Buhari has the power to hire and fire, adding that the appointment has nothing to do with CAMA law.

After taking arguments from Ararume, President Buhari, and Corporate Affairs Commission, Justice Ekwo fixed 28 March for ruling and possible judgment in the suit.

Ararume had dragged Buhari before the Court praying it to declare his removal as NNPC Chief illegal, unlawful and unconstitutional and that it is a total breach of CAMA law under which NNPCL was incorporated.

Apart from asking the court to issue an order to return him to office, Ararume also demanded N100 billion as compensation for the damages he suffered nationally and internationally in the unlawful way and manner his removal was carried out by President Buhari.