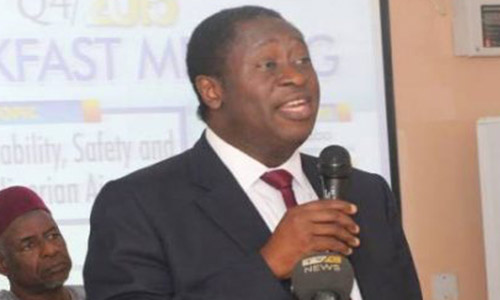 The Chairman of Bi-Courtney Group of Companies, Dr Wale Babalakin (SAN), and two of his companies are not indebted to the Asset Management Corporation of Nigeria (AMCON), the company’s management said on Tuesday.

AMCON had claimed that the eminent lawyer and businessman as well as two of his companies – Bi-Courtney Limited (Bi-Courtney) and Roygate Properties Limited (Roygate) – are indebted to AMCON.

In a statement yesterday, the management recalled that on July 30, the Chairman of AMCON, Dr Muiz Banire, at a meeting at the Presidential Villa in Abuja, released the names of firms he alleged were AMCON’s top 20 debtors.

It claimed that the Federal Government of Nigeria, which owns AMCON, is owing Bi-Courtney over N132 billion.

The statement said AMCON had been ordered by a competent court of law to deduct any debt allegedly owed to AMCON by Dr Babalakin, Bi-Courtney and Roygate from this sum.

It added: “In 2012, AMCON had alleged that Roygate, Bi-Courtney and Resort International Limited (Resort), companies belonging to Dr. Babalakin, were indebted to AMCON by N9 billion, N20 billion and N20 billion respectively. On April 5, 2012, the Federal High Court in a suit, Bi-Courtney Limited v. Attorney General of the Federation, ordered that whatever debt that was then owed by Dr Babalakin, Bi-Courtney, Roygate and other associated companies to any agency of the Federal Government of Nigeria, be deducted from the over N132 billion, which the Federal Government owed Bi-Courtney (the set-off Order).

“Independently, AMCON obtained the leave (permission) of the Court of Appeal as an interested party in AMCON v. Bi-Courtney and Attorney General of the Federation, to challenge the set-off order.

“Notably, before the Supreme Court judgment, AMCON sued Resort, claiming, amongst other reliefs, N20 billion. In a judgment delivered on June 13, 2018, AMCON lost the case and was ordered to pay substantial damages to Resort (the judgment of 5 June, 2018).

“Summarily, the court held that:

(i) Resort did not owe AMCON N20 billion;

(ii) On the transaction which supported AMCON’s suit, the Federal Government of Nigeria owed Resort N55 billion at an interest of 17.6 per cent per annum since December 3, 2015.

(iii) AMCON should pay N3 billon as damages to Resort. Indeed, the Federal Government’s present total indebtedness is in excess of N100 billion.”