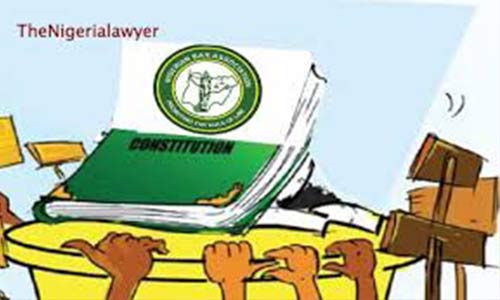 The NBA led by Mr Olumide Akpata announced the names of the members recommended for appointment into various committees pursuant to Section 12(3) and 20(1) of the constitution of the Nigerian Bar Association 2015 (amended). The committee was headed by Yusuf Asamah Kadiri SAN, co-chaired by Afam Osigwe SAN and others.

In the letter of appointment, the President conveyed the instructions of the NBA-NEC to the committee which was to review the extant constitution in order to ensure that it conforms with the recent development and highlight challenges affecting the smooth operations of the NBA. In view of this, the committee was entrusted with the responsibility of coming up with a draft constitution ready for presentation to the members of the association at the forthcoming Annual General Meeting. The report highlights the work done by the committee which covers the modus operandi adopted, the committee’s findings, analyses, and recommendations.

In order to ensure that the committee comes up with a valid constitution that complies with the amendment procedure outlined in the NBA constitution, the committee held its inaugural meeting and issued a call for the memoranda from the members of the association. The committee received 15 memoranda from different members, groups and found them very insightful. The committee also received and considered the Report of the NBA Electoral Audit and Reform committee. After approving it, the committee acknowledged and lauded the industry and hard work of the NBA Electoral Audit and Reform Committee led to Mr. Ayotunde Akintunde SAN.

PROPOSED AMENDMENTS INCLUDES;
1. MEMBERSHIP: In the spirit of inclusiveness, the committee proposed the creation of additional classes of the membership of the NBA to give the association, a modern international outlook and also create additional sources of funding. The committee proposed new changes like providing diaspora membership to Nigerian citizens who are enrolled at the Supreme Court but reside outside Nigeria, providing international membership to interested persons who are called to the bar or qualified outside Nigeria

2. THE NBA NEC: One of the proposed amendments is renaming NBA-NEC as National Executive Council in order to recognize it as the highest decision-making body after the Annual General meeting and also distinguish it from the elected national officers of the Association. In addition, it was proposed that the membership of the NBA-NEC should be expanded in order to create room for unrepresented components.

3. QUALIFICATIONS FOR HOLDING NATIONAL OFFICE: In order to promote inclusiveness among the members of the association, the committee recommended that other legal practitioners other than the one in active practice to contest for election into national offices but this does not extend to the offices of the President,1st Vice President, and General Secretary, the need to lower the threshold in respect of post-call qualifications to contest for some positions in order to ensure more participation of young lawyers amongst others. Lastly, it was suggested that some national offices in the NEC should be collapsed, the same also applies to membership in order to save cost.

4. ELECTIONS: The committee recommended that during national elections, there shall be election of the NBA Representatives to the General Council of the Bar as provided by the Legal Practitioners Act. It was also recommended that a truly independent ECNBA with zero or very minimum involvement of the NBA Secretariat. It was also proposed that there should be a draft Code of Conduct and Operational Guidelines. For the ECNBA to ensure their member conduct themselves appropriately in accordance with the rules of the NBA. Lastly, it was suggested that there should be the establishment of an Election Appeal committee both at the Branches and national levels

6. BRANCHES: it was recommended that by NBA-NEC at its quarterly meeting in Uyo, Akwa Ibom that the ten percent of the Bar Practicing Fees paid by members of each Branch shall be remitted to the branch in the months of April and December of each year. It was also suggested that the Uniform Bye-laws for Branches have also been significantly amended. The committee also recommended that there should be collapse of some branch offices into one office for efficient running of the branches. Furthermore, the committee also noted that the significant cost that the association bears in maintaining the branches, in view of these developments, it was suggested that the national executive council shall withdraw the recognition of any branch where the membership falls below 50 members.

7. SECTIONS: Substantive provisions have now been included in the body of the proposed draft NBA constitution to correctly recognize the Sections, Institutes, and Fora of the NBA. The following amendments were proposed:
a. For the first time, it was proposed that there would be compulsory membership of at least one section for all members of the association.
b. It was also recommended that the cabinet of sections be changed from Council to Executive council and the committee also made provisions that empower the executive committee, where necessary, three zonal representatives in accordance with the zones recognized by the NBA Constitution.
c. The committee also made novel provisions in the uniform bye-laws for sections on free and fair elections into executive committees of the various sections.

8. MISCELLANEOUS: The committee has recommended for the first time, the NBA constitution should define who a “Young Lawyer” is and what is meant by post-call qualification, to avoid the unending controversy over that issue. Additional Fora like NBA Corporate Counsel Forum, NBA law officers forum, NBA Lawyers in the Military Forum, NBA lawyers living with Disability Forum, and NBA Lawyers in Diaspora forum. The essence of creating these platforms is to promote inclusivity and to ensure that all the components of the Bar who have long been sidelined gain their voice or voices in the affairs of the association.

Conclusively, the foregoing represents the highlights of the comprehensive recommendations from the committee for the amendment of the NBA Constitution. The Committee thanked the NBA president, Mr Olumide Akpata and the NBA-NEC for the confidence reposed in the members of the committee to carry out this task and hope that the members of the NBA-NEC who attend the Annual General Meeting will favourably consider the recommendations and others when the Draft Constitution is tabled for adoption at the Annual General Meeting.