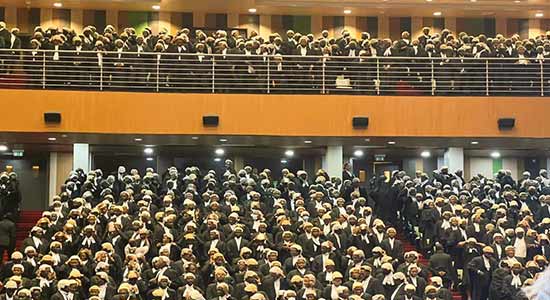 The Chairman of the Body of Benchers (BoB), Chief Wole Olanipekun (SAN), on Tuesday in Abuja, called 4,711 law graduates to the Nigerian Bar, amidst protest by the Nigerian Bar Association (NBA) led by Mr Yakubu Maikyau (SAN).

The NBA, had in a letter dated December 4, asked Olanipekun to step aside as chairman, while the Vice Chairman, Retired Supreme Court Justice Mary Peter-Odili, takes over the proceedings at Tuesday’s Call-to-Bar ceremony.

The letter signed by Maikyau was predicated on an earlier request by the former President of the NBA, Mr Olumide Akpata.

According to the NBA, the BoB chairman should recuse himself as head of the body pending the resolution of issues bordering on professional misconduct of a former partner of Wole Olanipekun and Co. law firm.

However, during Tuesday’s ceremony, which was presided by Olanipekun, the NBA president was said to be “absent”.

Olanipekun, in his speech, said it is necessary to clear some “misconception” about the BoB, which according to him, is a creation of the statute responsible for the formal call-to-bar of persons seeking to become legal practitioners.

He added that the BoB, as a corporate body with perpetual succession, has its own seal and is also imbued with the power and jurisdiction to make regulations for itself and the legal profession.

“The term of office of the Chairman is only one year, from March of the preceding year to March of the following year, and the chairmanship of the body is rotated between the Bar and Bench, that is if a member of the bar is the chairman, the vice-chairmanship automatically devolves on the Bench,” he said.

While observing that it is a tradition they met and has sustained for the years, Olanipekun stressed that: “Our transition is always seamless, and has never been rancorous.

“The Body of Benchers is not an appendage of the federal government, or any government, institution or agency, howsoever.

“It is an independent and autonomous body, and its meetings, affairs and decisions are not influenced by any power or authority whatsoever.”

Olanipekun also explained that although the Legal Practitioners Disciplinary Committee (LPDC), responsible for the discipline of lawyers, is a committee of the BoB, the LPDC is a juristic personality on its own, independent of the body, not controlled in any way or manner by either the body or chairman.

The senior lawyer meanwhile, seized the opportunity to caution that, “proceedings before the LPDC should not be politicized, sensationalized, publicized and advertised in advance or while the proceedings are ongoing by complainants for whatever reason howsoever, as by so doing, negates the principle of fair hearing, which all lawyers subscribe to.”

As part of his admonition to the new wigs, Olanipekun urged them to act notably in and out of court.

He said: “Do not engage in strife, blackmail, mudslinging, campaign of calumny, treachery or any attempt to run or pull anyone down. Flee from envy like plague, for envy breeds hatred and unjustified contempt for others. Appreciate your colleagues and peers, as well as senior members of the profession who have received God’s benevolence, and pray that your own time will come.”

While pleading with the National Assembly to stop making laws or amending the Legal Practitioners Act, to pave the way for the proliferation of Law School campuses, the chairman commended President Muhammadu Buhari and the Attorney General of the Federation (AGF) and Minister of Justice, Mr. Abubakar Malami, for their cooperation and implementation of the 2018 report on judicial officers’ welfare packages.

According to Chiroma, the institution has contributed to training of the entire arm of government — the judiciary.

“The products of the school have commanding presence in other spheres of public and private sector such as the military, police, customs, immigration, the oil and gas sector, banking and finance etc,” he said.