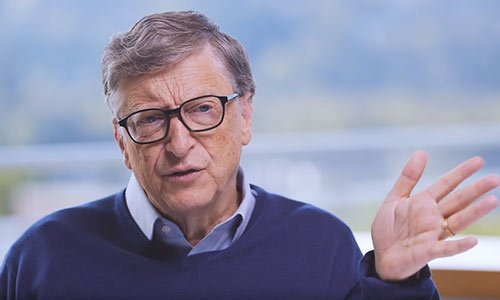 Climate change is being fueled by the release of greenhouse gas emissions and those emissions are coming from every sector of the global economy: Electricity, manufacturing, transportation, agriculture, industrial processes. Collectively, greenhouse gas emissions have generally been climbing for decades. Activists often advocate using less and consuming less as one potential solution to climate change — degrowth, it’s often called.

This idea is quixotic, according to Bill Gates, who founded Breakthrough Energy, an investment fund for climate technology and innovation, in 2015 and published “How to Avoid a Climate Disaster” in 2021.

“I don’t think it’s realistic to say that people are utterly going to change their lifestyle because of concerns about climate,” Gates said to Akshat Rathi in an episode of the Bloomberg podcast, “Zero,” which published on Thursday. The interview was recorded in August before the Inflation Reduction Act was passed.

“You can have a cultural revolution where you’re trying to throw everything up, you can create a North Korean-type situation where the state’s in control. Other than immense central authority to have people just obey, I think the collective action problem is just completely not solvable,” Gates said.

Most individuals are not going to change their individual behavior in ways that make them less comfortable for the benefit of a global problem, the billionaire technologist said.

“Anyone who says that we will tell people to stop eating meat, or stop wanting to have a nice house, and we’ll just basically change human desires, I think that that’s too difficult,” Gates said. “You can make a case for it. But I don’t think it’s realistic for that to play an absolutely central role.”

Also, there are a slew of other issues competing for attention and dollars, including the global pandemic, rising health care costs, aiding poor countries for issues besides climate change, and the war in Ukraine, too.

“People who are in the climate space may not realize how many things are competing for the modest amount of increased resources that society has,” Gates said. “And that not that many people are prepared to be worse off because of climate requirements.”

The solution, according to Gates, is creating better technological alternatives where it is the same price or cheaper to accomplish the same goal in a climate-conscious way. Gates has long talked about the space between the cost of how something is conventionally done and the way it should be do in a decarbonized way the “green premium.” To make meaningful change on climate change, that green premium has to slowly reduced and then eliminated in all sectors of the economy, according to Gates.

In an effort to close that green premium, Gates’ investment fund, Breakthrough Energy Ventures, puts money into early-stage startups that are working to to create new pathways for producing things or new ways of doing things.

In the course of the interview, Gates hinted that Breakthrough Energy Ventures would be raising a third fund by next year to continue to invest in and accelerate the development of these climate startups. He also indicated that Breakthrough Energy will likely raise money to invest in later stage companies, too. “Even as the ebullience in investing in tech and climate companies is down a bit, I still think we’ll be able to raise the money,” he told Rathi.

Also important, the path to decarbonization is not always a straight path of progress away from fossil fuels. The war in Ukraine and Europe’s efforts to reduce its dependence on energy from Russia has shown that there might be temporary setbacks in larger decarbonization goals for the sake of taking care of people.

“When people say to me, ‘Hey, we love your climate stuff, because we can tell Putin we don’t need him.’ I say, ‘Yeah, 10 years from now. Call him up and tell him you don’t need him,’” Gates said.

Between now and then, the European Union may need to fall back on fossil fuels. “Should you reopen coal plants? Probably. These pragmatics are pretty important. Should that Netherlands’ gas field be reopened? Maybe so. It’s a very tough set of tradeoffs. Very unexpected,” Gates said. “In the short range, you just have to find any solution, even if that means emissions are going to go up. The sooner that war ends, the better. But there’s a lot of considerations that go into how to bring it to an end.”

In the long run, however, finding new ways of supporting people is the only feasible solution, according to Gates. “I’m looking at what the world has to do to get to zero, not using climate as a moral crusade,” he said.