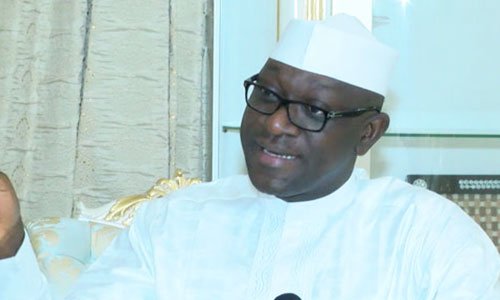 Honourable Abdulmumini Jibril, a Member of the House of Representatives (Kiru/Bebeji) Kano State, needs no mention when it comes to controversies. He recently jumped into a fresh political crisis over allegation of anti-party posturing in his constituency.

If not because the Speaker of the House of Representatives, Femi Gbajabiamila, said was well, it will not be wrong to suggest that Hon. Jibrin was denied leadership of any committee in the House as part of a grand plan to once again “punish him” over his alleged grandstanding.

Rt. Hon. Gbajabiamila said it was at the instance of Hon. jibrin that he was not given any leadership position in the 9th House. Feelers indicate that the Kano legislator is expecting a “major” appointment from President Muhammadu Buhari in the coming days.

During the 8th Assembly, Jibrin who played a key role in the ascension of Yakubu Dogara (then APC, Bauchi) as speaker was rewarded with the position of Chairman of Appropriation Committee.

He was, however, stripped of the chairmanship and suspended from the House over the budget padding controversy, a development that ensured he was out of the National Assembly for a very long time.

When he returned, settled and preparations for the 2019 elections began, he aligned with the team that spearheaded the emergence of Gbajabiamila (APC, Lagos) as speaker. Indeed, he was the Director General (DG) of Gbajabiamila’s campaign organisation, and many thought he would once again be rewarded with another “juicy” committee.

However, this did not happen; instead, the issue of “big appointment” from the Federal Government (FG) surfaced.

In the midst of this suggestion, the issue of suspension filtered from Kano, and there are fears that he may be sacked from the ruling party.

Jibrin was accused of sabotaging his party, the APC, during the last general elections, especially during the governorship and state assembly elections.

The lawmaker was said to have campaigned against APC’s Dr. Abdullahi Umar Ganduje who was looking for a second term.

He also “allegedly” worked against Alhaji Usaini Danbirni Jibril who was a state assembly candidate.

Other offenses levelled against Jibrin included castigating the APC leadership in Kano during a radio programme which he sponsored, diversion of APC agents’ allowances during the 2019 general elections and mobilising councillors to remove the current Chairman of Bebeji Local Government Area (LGA), Alhaji Ali Namadi.

It was further alleged that Jibrin’s anti-party activities during the polls contributed immensely to the victory of the major opposition party, the PDP, in Bebeji LGA.

Daily Trust also learnt from a reliable source within the party that all the councillors that supported the removal of the chairman have been suspended by the party.

The councillors were said to have “illegally” announced the impeachment of Namadi and subsequently replaced him with the Speaker of the council, Alhaji Ali Ibrahim, without following due process.

It was also learnt that when the issue was brought before the APC Executive Committee of Bebeji, a seven-man committee headed by Alhaji Musa Salihu Bebbeji was set up to investigate all the issues raised against the lawmaker.

However, when the committee invited Jibrin to appear before it, he shunned the invitation without any reason.

And as result of this, the committee compiled its report and submitted same to the executive committee as directed.

The APC executive committee in Bebeji thereafter issued a press statement on July 30, adopting the recommendations of the seven-man committee.

The statement, signed by the APC Chairman in Bebeji LGA, Alhaji Sulaiman Sabo Gwarmai, read in part, “After a thorough investigation, the seven-man committee set up to investigate the issue of anti-party allegations against Hon. Abdulmumini Kofa has submitted its report and recommendations to the local government executive which subsequently met and deliberated and adopts as follows:

“That having confirmed various anti-party activities by Hon. Kofa which were found to be contrary to some provisions of the party’s constitution, ranging from Article 21 Paragraph A (ii) (v) and (vii), the executive committee adopted the report and hereby suspends Hon. Abdulmumini Jibril Kofa immediately for 12 months.

“The executive also adopted the committee’s recommendations, urging the state executive to recommend to the national executive, the immediate expulsion of Hon. Kofa from the party for various offenses which were also found to be contrary to Article 21, Paragraph A (ii), (v) and (xi) of the party constitution.”

The APC Chairman in Bebeji, Alhaji Sabo Gwarmai, who confirmed the suspension of Kofa, told Daily Trust on Sunday, that the offenses committed by the lawmaker were grievous enough that no serious party could ignore them and allow him to go unpunished.

He said, “We have submitted our recommendations to the party’s state executive for further actions. We are now waiting for its response. Kofa’s action is unacceptable, hence we must do something that will serve as deterrent to others.”

When contacted, the Chairman of APC in Kano State, Alhaji Abdullahi Abbas, confirmed the receipt of the report from Bebeji, saying, “The APC state executive has already endorsed all the recommendations contained in the letter and forwarded same to the national executive committee for further actions.

“APC cannot condone such kind of anti-party activities from any of its members no matter how highly placed. The person involved, as a lawmaker, should have set example by honouring the invitation sent to him by the APC local government executive committee. But unfortunately, he ignored the committee.

“I did not expect him to turn down the invitation. He rode on the back of the party to attain the position he is occupying at the National Assembly, but at the same time he is disrespecting the party. We are waiting for the party national executive to endorse our recommendation to announce his expulsion from the APC.”

A local politician in Bebeji confided in Daily Trust that Kofa’s alleged anti-party activities against the APC were nothing but “an act of political vengeance.”

He recalled that the lawmaker campaigned against Ganduje because the governor too did not support him during the National Assembly polls.

“This is the genesis of the crisis. During the elections, Kofa mobilised his supporters and directed them not to vote for Ganduje and the APC candidate for the state assembly,” he said.

Effort to reach Rep. Kofa for comment on the unfolding issues could not yield positive results and here are the corresponding text messages between this reporter and the lawmaker:

Me: Hon. I am Yusha’u, Daily Trust’s Regional Editor. I want to speak with you and it is important and urgent.

Rep. Kofa: I am really sorry just seeing this. What’s the issue please?

Me: It is on your suspension, just want to hear your own version of the saga so that we can make a balanced story.

But the lawmaker did not respond.

Therefore, only time will tell whether the APC National Executive Committee will endorse the recommendations of the Kano APC State Executive and expel the lawmaker from the party or not.

And analysts are also curiously waiting to see whether the much-awaited big appointment for Rep. Kofa by the Federal Government will come to fruition.