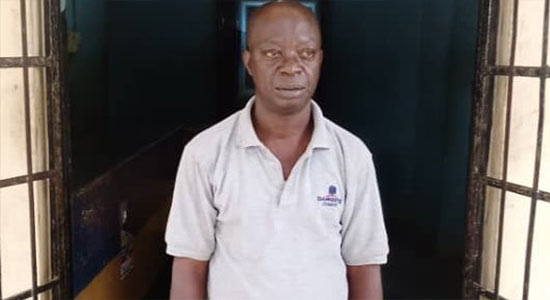 A Nigerian police officer, armed with a rifle, has been filmed threatening to impound a vehicle if the driver refused to give him a bribe.

From the clip which was posted on Twitter, it appears the man was flagged down on the road by the police before the unidentified officer began putting pressure on him to part with some money.

Their conversation is in Yoruba language.

“Your car is tinted, (and) you are saying ‘please please’. If everybody is saying please, where will I see money to fuel my car?” the bribe-seeking officer said to the man whose face is not shown in the clip.

The man’s voice could be heard, begging the officer that he did not have the money to give him.

UPDATE ON TRACKING NUMBER: #CRU415984
The officer who was seen in this viral video behaving in an unprofessional and corrupt manner, has been identified, arrested, disarmed and detained for further investigation and disciplinary action.

“If I get angry I will keep your car,” the officer said adamantly.

The man eventually agreed to do electronic transfer of cash to the officer who seemed to be skeptical about it.

The police on Saturday said that the erring officer has been arrested.

“The officer who was seen in this viral video behaving in an unprofessional and corrupt manner, has been identified, arrested, disarmed and detained for further investigation and disciplinary action,” the Complaint Response Unit of the police said in a Twitter post.