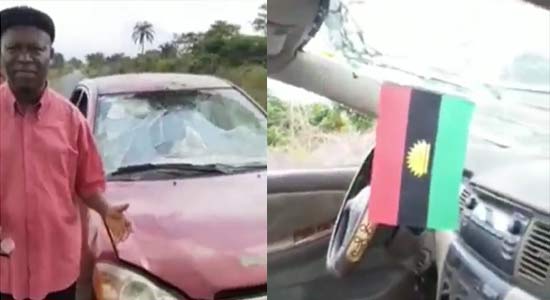 The windscreen of an Imo based lawyer has allegedly been smashed by men of the Nigerian Army for having a Biafran flag.

The victim (lawyer) whose name is yet to be known disclosed in a video that the incident happened while on his way to a neighboring town.

He said he was accosted by men of the Nigerian Army and when he stopped, they smashed his car simply because they saw a Biafran flag in the car.

According to him, the soldiers said he should thank his God that he was a lawyer, else, they would have ‘wasted’ him.

“Is that the way to live? Let the world know that we are no longer free in Imo State.” the lawyer lamented

He expressed concern that his car was vandalized for no just cause. According to him, he has the right to admire the Biafran flag, and doing that is not a crime

Meanwhile, the United Kingdom policy states that Biafran separatist groups who wish to apply for asylum in their country on the ground of “political persecution” must be physically present in the UK.

The applicant must also not be considered a security risk to the UK.

TheNigerialawyer had earlier reported that the Federal Government of Nigeria rejected the plan by the UK government to grant asylum to persecuted members of IPOB and the Movement for the Actualisation of the Sovereign State of Biafra (MASSOB).

The UK Visas and Immigration (UKVI) has released new guidelines to its decision-makers on how to consider and grant asylum applications by members of Biafran secessionist groups.

Asylum is to be granted to “persecuted” members of the Indigenous People of Biafra (IPOB), which has been designated as a terrorist organisation by the Nigerian government, and the Movement for the Actualisation of the Sovereign State of Biafra (MASSOB).