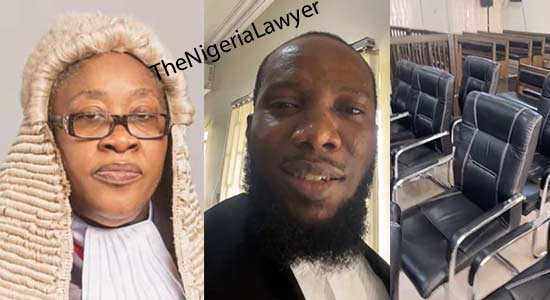 *Claims Judge Ordered His Imprisonment After He Questioned Expulsion Of Premium Times Reporter From Court
*Falana Requests CTC Of Proceeding, Promises To Secure Liberty For Effiong

In a series of posts on his verified social media accounts moments ago, Effiong narrated that he was ordered to be jailed for defending Leo Ekpenyong in a libel suit filed by Governor Udom Emmanuel.

He narrated that when the matter was called up for hearing today, he informed the court of a pending motion asking the Chief Judge to recuse himself from the suit on the ground of likelihood of bias.
According to him, the Judge directed him to abandon the motion and proceed to the case.

He proceeded to explain the circumstances leading to his incarceration. On his verified Facebook page, he wrote:

“The Chief Judge of Akwa Akwa Ibom ordered a Premium Times reporter to leave the court. I said my lord, we were thinking that since the proceeding is public, that members of the public should be allowed to observe the proceeding. My Lord asked me to proceed with cross examination.

I obeyed. I informed the court that I was not feeling comfortable and safe having two armed mobile policemen seated inside the courtroom, that it was strange and that I felt unsafe. I applied for the judge to excuse the armed policemen from the courtroom.

He continued, “The Hon. Chief Judge then ordered me to step out of the Bar, that she was sending me to prison. She then ordered the policemen to take me to Uyo prison. And that I should be in jail for one month. I am waiting inside the courtroom for them to bring the conviction warrant.”

In another post, he wrote “I will be going to the Uyo Correctional Centre now. I have not done anything. I wasn’t even opportunity to say anything before the “conviction”. Two lawyers in court appealed to the Hon. Chief Judge but my Lord insisted that I must be jailed.”

I will be going to the Uyo Correctional Centre now. I have not done anything. I wasn’t even opportunity to say anything before the “conviction”. Two lawyers in court appealed to the Hon. Chief Judge but my Lord insisted that I must be jailed.

TheNigeriaLawyer recalls that in a previous proceeding, the Chief Judge had threatened to jail Effiong for “overstepping his bounds”

In the proceeding, the Chief judge, lashed out at the counsel, Mr Effiong, who pleaded with the court to entertain his application which seeks the judge’s withdrawal from the case after his client, Leo Ekpenyong, accused her of bias.
“I will send you out of there now, remove that robe and send you to prison by the time you go to the Court of Appeal and come back. What is this? You are overstepping your bounds,” Justice Obot lashed out at Mr Effiong.

The Court also ordered ordered the police to temporarily confiscate mobile phones from observers inside the court to prevent any recording of the proceedings.

Governor Emmanuel sued Mr Ekpenyong, a lawyer, for defamation of character over the publication in which he accused the governor of “buying judgment” from the 2019 National Assembly Election Tribunal, an accusation the lawyer denied.

The court had ordered Mr Ekpenyong to pay the governor N1.5 billion as general damages for libel.

FALANA REQUESTS FOR CTC OF PROCEEDING, PROMISES TO SECURE LIBERTY FOR EFFIONG

Renowned Human Rights Lawyer and Senior Advocate of Nigeria, Femi Falana SAN in his response to Effiong’s incarceration said he has commenced the process of securing his liberty as soon as possible.

He told TheNigeriaLawyer, “I have been briefed by Effiong to take up the matter on his behalf. Having not committed an offence he strong remains very strong.

I have asked a colleague in Uyo to apply for the ctc of today’s proceedings. Once we are furnished with the record we shall file the necessary processes with a view to securing his liberty as soon as possible.”

Counsel to Governor Emmanuel, Samuel Ikpo speaks on the matter

Speaking on the decision of the court, Counsel to Governor Emmanuel, Samuel Ikpo said he was shocked that a lawyer could utter such damning and profane utterances against a judge.

“I believe that when he comes out of the correctional facility, he will learn how to conduct himself before a court.

He wondered why Inibehe could disobey an order given to him by the judge, who asked him to take off his wig and step aside from the bar and he choose to remain obstinate.

“A lawyer should not allow himself to use one client to destroy his reputation before all the judges.

“I think Justice Obot has really been patient with him all these while,even as a lawyer, I could not tolerate the young lawyer’s conduct”. Barr Ikpo stated.