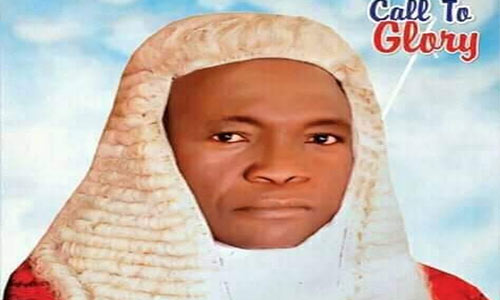 Members of the legal community both the Bar and the Bench gathered at the State High Court Makurdi to hold a valedictory court session in honour of Court of Appeal Justice, Honourable Justice Joseph Tine Tur, JCA.

At the valedictory speech of the NBA Makurdi branch, J. K. Ishember Esq. obtained by TheNigerialawyer dated 1st November 2019, he described the late Justice as one of the oracles of the Benue legal community who has affected eternity for no one can tell where his influence stops!

FINAL ADDRESS OF THE BENUE BAR IN SUPPORT OF MOTION ON NOTICE UNDER THE INHERENT JURISDICTION OF THIS HONOURABLE COURT.

May it please my Lords, your Excellencies, appearing at this special court session are J. K. Ishember Esq. (Chairman NBA Makurdi Branch), Malami Lillian Aondoakaa Esq. (Chairman NBA Gboko Branch), Prince Innocent Ochoga (Chairman NBA Otukpo Branch) and innumerable members of the Benue Bar all present in court today. We highly appreciate the person/presence of the third Vice President of the Nigerian Bar Association, the Learned T. T. Igba Esq. We have a brief of the Benue Legal, Religious and Cultural Communities.

This is the Final Written Address of the Benue Bar filed in reaction to the application ably moved by the leader of the Benue Bar – The Honourable Attorney General and Commissioner for Justice, Benue State – the learned Michael Gusa Esq. praying for an order of committal to earth of the lifeless body of our worthy ambassador, friend, counselor, father, Evangelist and Benefactor, the Distinguished              Honourable Justice Joseph Tine Tur, JCA.

My Lords, we are very reluctant to support the application just moved by the Leader of the Benue Bar.  We pray my Lords’ patience to accord us fair hearing and be persuaded to give a well considered ruling.

Section 291 (1) of the Constitution of the Federal Republic of Nigeria provides that a judicial officer appointed to the Supreme Court or the Court of Appeal may retire when he attains the age of Sixty – Five years and he shall cease to hold office when he attains the age of seventy years. This is the pith and substance of our address to this Honourable Court. As shall be clearly shown hereunder, the Honourable Justice Joseph Tine Tur, JCA had celebrated only Sixty – Three birthdays before the filing of this application.

The Honourable Justice  Joseph Tine Tur, JCA proceeded to the Boy’s Secondary school Gindiri, Mangu Local Government Area of Plateau State for his secondary education from 1970 to 1974. The next year he gained admission into the premier faculty of law in Nigeria – the University of Nigeria, Nsukka, Enugu Campus where he was awarded the Bachelor of Laws LL.B (Hons.) (Nig.) in 1979 and upon successful completion of studies at the Nigerian Law School, was called to the Nigerian Bar in 1980.

My Lords, your Excellencies, the Honourable Justice  Joseph Tine Tur, JCA began his legal career at Rivers State Ministry of Justice where he observed the compulsory National Youth Service from 1980 to 1981. He continued his pupilage after the Youth Service at the law firm of B. M. Wifa SAN & co., Port Harcourt, Rivers State from 1981 to 1982 before he returned to Benue State to take an appointment with the Benue State Judiciary as a Magistrate in 1982.  After a year at the Lower Bench, the Honourable Justice Joseph Tine Tur, JCA bounced back to private legal practice in 1983 where he diligently practised at Agan Yaji & Co., Gboko, Benue State and proceeded to manage Baba Adi & Co. Gboko, Benue State from 1984 to 1985 before he established Tine Tur & Co. Gboko, Benue State in 1985. The Honourable Justice Joseph Tine Tur, JCA skillfully directed proceedings at Tine Tur & Co. where he nurtured great legal minds like the erstwhile Honourable Attorney General of the Federation and Minister of Justice – Chief Michael Kaase Aondoakaa SAN.

Bowing to pressure to serve the state again, the Honourable Justice Joseph Tine Tur, JCA accepted appointment to serve as the Director of Public Prosecution, Benue State Ministry of Justice in 1992 where he exuded excellence until his appointment as a Judge of the High Court, Benue State Judiciary on the 3rd day of February 1993.

Prior to his appointment as a Judge of the High Court, the Honourable Justice Joseph Tine Tur, JCA served Benue State as Chairman, Local Government Election Petition Tribunal No. 2, in 1991 while he was yet in private legal practice. Sitting as a High Court Judge of the Benue State Judiciary, the Honourable Justice Joseph Tine Tur, JCA distinguished himself as a cerebral jurist reminiscent of the English Lord Denning. Little wonder, his judgments as a High Court Judge were considered worthy of reporting to serve as permanent record for the development of our jurisprudence.   See Judgment of Tine Tur J. (as he then was) delivered on 19th day of February 2007 reported as:

My Lords, Your Excellencies, the Honourable Justice Joseph Tine Tur, JCA remains one of the oracles of the Benue legal community who has affected eternity for no one can tell where his influence stops!  We resist the temptation to savor his judgments littered in our law reports. As rightly opined by a commentator, “he brought fresh revolution to judgment writing … he simplified judgment writing; made it readable and elaborate for research purposes.” The Benue legal community attests to the potency of Raphael Ajunwa v. Commissioner of Police.  Less than a year at the Court of Appeal my Lord bequeathed another compendium of criminal law and procedure. See Agundi V. Commissioner of Police (2013) All FWLR (Pt. 660) 1247.    The Honourable Justice Joseph Tine Tur, JCA preserved a glimpse of his erudition and inspiration in the following books: Sharia and the Constitution (2002), When the Holy Spirit Hovers (2007), I will build my Church (2008), Law and Principles of Tithes & Offerings (2010) and the Reign of the Martyrs (2012). He was a man of integrity and generous; he lived the Christian Faith!

It is pertinent to note that the Honourable Justice Joseph Tine Tur, JCA was married to Mrs. Esther Nguumbur Tine Tur and the union is blessed with good nurtured children two of whom are members of the Nigerian Bar Association – Raymond Vershima Tine Tur Esq. and Nguavese Tine Tur Esq.

Just last week, specifically on Tuesday 22nd October 2019, a judge of the Federal High Court serving at Akure Judicial Division, the Hon. Justice Abdu Dogo was abducted with his driver at a border town between Edo and Ondo States. The abductors are reported to have demanded a Fifty Million Naira ransom! Though Justice Abdu Dogo was released in the early hours of Saturday 26th October 2019, it is yet to be ascertained if the demanded ransom was actually paid. No news of the arrest of the perpetrators of the heinous crime either. Expectedly, the President of the Nigerian Bar Association Paul Usoro SAN condemned in the harshest terms the ugly development. See the Press Release of the Nigerian Bar Association dated 24th October 2019 where the President stated inter allia:

The more depressing aspect of this incident is that the NBA has established that Honourable Justice Abdu Dogo’s kidnap is not an isolated incident of security breach against our judges. Some weeks ago, the residence of the head of one of our Federal Courts was invaded and vandalized by burglars who made away with valuables.  We also understand that some of our judges – including Court of Appeal Justices do not even have police orderlies!  That is how low and bad the security architecture around our judicial officers is and yet, we claim to prize justice and to be a country that places premium on the Rule of Law. In other climes where justice and the Rule of Law are prized, criminal attacks against Judges are considered taboo even by criminals and where they occur, the long arm of the law is deployed to speedily bring the criminals to book.  We betray our vaunted esteem for justice and its administration and the Rule of Law when we cannot even protect and secure the men and women who dispense justice in our country.

As throwing caution to the wind, just about Forty – Eight hours ago, on the Wednesday 30th October 2019, Hon. Justice Nwosu Iheme JCA of the Benin Division of the Court of Appeal was kidnapped by unidentified gun men killing her orderly on the spot.

My Lords, your Excellencies, rising from her monthly General Meeting held on Thursday the 31st day of October 2019 at the Royal Choice Inn Makurdi, the Nigerian Bar Association Makurdi Branch resolved to call on Government at all levels to rise up to her primary duty of protection of lives and properties. We seize this opportunity to make this clarion call!

Beginning from our Jerusalem, the Makurdi Branch hereby demands the immediate restoration of Police Orderlies and Police Court Duty Officers to all Judicial Officers and Courts within her jurisdiction. The Makurdi Bar has observed with dismay that some Judges are unduly exposed to the avoidable risk of sitting/presiding/living without orderlies and no security personnel attached to these courts to evoke the faintest atmosphere of Government in session.

NBA Makurdi Branch calls on the relevant authorities to remedy this anomaly before the 3rd day of November 2019. We shall in due obeisance to our bounden duty vindicate our existence as the exigencies of the situation may direct. We adopt as our reasoning and position the submissions of the NBA President Paul Usoro SAN stated in the NBA Press Release dated 24th October 2019:

… It truly makes no sense in the Nigeria of 2019 that a judicial officer of any court is not assigned a security detail as of right and without any delay. There is indeed no reason why the homes of our judges should not be well secured and protected with adequate security cordon.

My Lords your Excellencies, we regrettably concede that the Exhibit relied upon by the Leader of the Benue Bar – The Honourable Attorney General and Commissioner for Justice Michael Gusa Esq. is incontrovertible. As officers of this Honourable Court, we are constrained to support the application as prayed. We take solace in the fact that as opined by William Shakespeare: “Death makes no conquest of this conqueror; for now he lives in fame, though not in life.” the Honourable Justice Joseph Tine Tur, JCA, lives on!