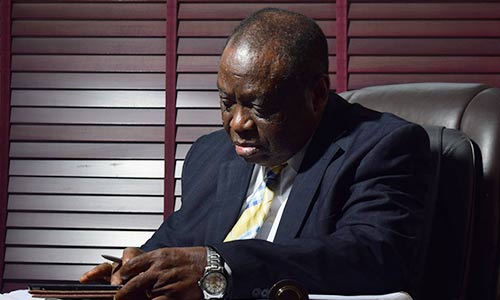 *Says It Is A Great Achievement For A Judge To Serve His Tenure In The Difficult Office Of A Judge
*Says long before now, no one has excluded Senior Lawyers from being appointed directly to the Supreme Court
*Says no one should be allowed to bastardize the Rank of Senior Advocates of Nigeria

Senior Advocate of Nigeria, Chief T. J. Onomigbo Okpoko (OON), has congratulated Honourable Justice Aminu Sanusi, JSC, OFR, who retires from the Supreme Court Bench on his attaining the constitutional age of retirement of Seventy (70) years. According to him, His Lordship has paid his dues in the scheme of things and now deserves his rest and the warm embraces of his family.

Chief T. J. Onomigbo Okpoko made this remark during a speech he delivered on behalf of the Body of Senior Advocates of Nigeria, at the special valedictory session of Supreme Court to mark the retirement from Supreme Court of Hon. Justice Aminu Sanusi, OFR, on compulsory retirement on attaining the age of seventy (70) years on Monday, 3rd February, 2020.

According to him, ordinary citizens and other stakeholders who may not have occupied the hot seat of a Judge and or undertook the task of hearing and deciding disputes between parties may not appreciate the task and stress involved in doing so; that, in a country like ours, where ascertainment of the truth in a case, creates the most stressful part of any trial in any case, the task is particularly daunting; that denial of truth and the suggestion of falsehood which still dominates trials in our country of today, aggravates the stress of Judges. He thus said that it is therefore a great achievement for a Judge to serve his tenure in the difficult office of a Judge or Justice and retire gracefully at the prescribed age of Seventy (70).

Emphasizing the need why lawyers must stand up and fight for the Judiciary as an institution, amongst others, he voiced his concern in the appointment of Justices of the Supreme Court. According to him, long before now, no one has excluded Senior Lawyers from being appointed directly to the Supreme Court which was the only Appellate Court then.

“Probing journalists and other stakeholders in and outside the Legal Profession have asked, why Senior Lawyers at the Bar and Senior Advocates of Nigeria are not considered for appointment into the Supreme Court and the Appeal Court directly from the Bar. The reported brief response of the Honourable Chief Justice of Nigeria, suggests that there is a cast iron policy in place somewhere, which prohibits Senior Counsel at the Bar from being appointed directly as Justices to Appellate Court Bench in Nigeria. I am touched by the issue and I feel compelled to refer to it, in this address. Long before now, no one has excluded Senior Lawyers from being appointed directly to the Supreme Court which was the only Appellate Court then. Examples abound, Honourable Justice Nnamani was appointed into the Supreme Court while serving as an Attorney. His Excellency, Hon. Dr. Justice Ellias, who served as President of the World Court, was appointed to the Supreme Court Bench in Nigeria. He was a Law Professor at the University of Lagos. He did not serve as a Magistrate or Judge of a High Court. He not only served as Justice of the Supreme Court, he in fact was appointed Chief Justice of Nigeria.

“These are all matters within our own living memory. There were earlier appointments of Senior Lawyers in the Appellate Court. They did not go through Magistracy and or the High Court Bench or any other Court before landing in the Supreme Court. The records of their achievements are well documented in the Law Reports and Legal Documents or processes. Not one of them can be described as having performed below expectation. The question of appointment of Senior Lawyers to the Supreme Court and Court of Appeal has been on the drawing board for long. I met it when I became Bar President in 1998 and I pressed it until I completed my tenure. The Bar and the Bench are members of one profession of Law. There appears to me to be no reason why one arm of the same Profession should seek to exclude the other arm of the profession from being appointed a Justice of the Appellate Courts.

“The question now is why has there been this resistance in appointing Senior Lawyers from the Bar as Appellate Judges? No one has given us an explanation until the recent statement by the Chief Justice of Nigeria. We are not here to join issues with his Lordship. I believe that bringing in Senior Lawyers into the Supreme Court and Court of Appeal would enhance the intellectual content of delivered Judgments of the Court. One does not have to be a Magistrate or a Judge at the lower level before being a Justice of the Supreme Court or the Court of Appeal. The presence of Practitioners directly appointed to the Bench of the Appellate Courts would bring new experience to the Appellate Courts and their works. As the highest Court of the Land, only the best Legal minds should occupy its Bench and to have a mix from the Bench and Bar will certainly enrich our Legal Jurisprudence,” he said.

Speaking further, he said that the point appears to have been made that if Senior Lawyers are appointed to the Supreme Court and Court of Appeal, they would block the chances of the Lawyers who have served as Magistrate and at the lower Court, stressing that, here are two (2) quick responses to this; that, the first, is that the post of a Judge is an appointive position and not a promotional position as a reward for Lawyers who served as Magistrates. Secondly, a Magistrate who served meritoriously can find his way to the Supreme Court. Justice Ephraim Akpata, JSC and Justice Obaseki, JSC, started off as a Magistrate and a Customary Court President respectively and rose up to the Supreme Court. So, the fear that Magistrates would be blocked from entering in to the higher Bench is debatable.

“Let the door be open to every legible Lawyer as enshrined in Section 231(3) and Section 238(3) of the 1999 Constitution of the Federal Republic of Nigeria. What the Appellate Court needs are more intellectually sound, efficient and hardworking Justices. Only the best Lawyers from the Bar and the Bench should man the Apex Court. It is the final court; It is not a Court for carrying out Legal experiment or training.

“This is a serious issue which deserves serious consideration. It is not a matter as to whether the Bar agrees or disagrees with the stand of the Hon. Chief Justice of Nigeria. The way forward, is to have a round table talk and in-house debate. I plead with the Right Honourable Chief Justice of Nigeria to arrange for this in-house discussion, as it is in the interest of all stakeholders. Unity and oneness of the Bar and Bench is of fundamental importance in policies concerning the operations of Courts and the administration of Justice.

“Until we have a rethink on what appears to be the prohibition imposed on Senior Members of the Bar from being appointed into the Appellate Court, the pressure for change is not going to go away anytime soon. The Body of Senior Advocates of Nigeria therefore appeal to the Honourable Chief Justice of Nigeria and all the appointing authorities of the country to have a rethink and let the need to have a virile Judiciary prevail,” he added.

He also said that Nigerians are well known for their penchant to bastardize institutions and offices. “The Legislators can take any number of Chieftaincy Titles, they can acquire as much as Honorary degrees from within and outside the Country but they have to understand that the Rank of Senior Advocates of Nigeria is designed for honouring members of the Bar who have, by their advocacy or by their intellectual contributions through teaching and writing law books have attained distinction in the Legal Profession. No one should be allowed to bastardize the Rank of Senior Advocates of Nigeria,” he said.