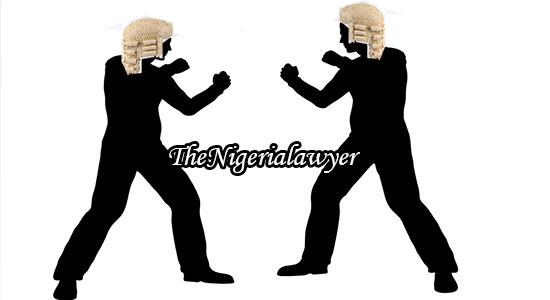 The Nigerian Bar Association, NBA, Gombe Branch, has issued a statement regarding the exchange of blows before the Chief Magistrate Court No. 3 Gombe State between two lawyers – John Yuwo of NBA Jos Branch and MK Gurumyen of NBA Gombe Branch.

According to the report by the Chairman, NBA Gombe Branch, Ahmed Tukur,  Esq, dated 23rd September 2021, Police O/C Legal Umeadi Thomas, Esq., instantly directed that the matter be referred to him at his office instead of taking it to Tumfure Police Division.

Read the full statement by Tukur

UPDATE ON JOHN YUWA, ESQ. OF NBA JOS BRANCH AND OUR CHIEF MK GURUMYEN, ESQ.’S MILD MISUNDERSTANDING THAT ENSUED TO FIGHTING BEFORE THE CHIEF MAGISTRATE COURT NO. 3 GOMBE

Good evening our learned seniors and colleagues. This is to update the house on the very uncalled for and unfortunate incident that occurred between two learned colleagues namely: John Yuwa, Esq. of NBA Jos Branch and our Chief MK Gurumyen, Esq. of the Jewel Bar today Thursday 23rd September, 2021 before the Chief Magistrate Court No.3 Gombe presided over by our learned Chief Magistrate Yusuf Idi Saluk, Esq.

The brief fact of the case as gathered from the different statements of the two involved counsel is that, they were before the court for a pending criminal case filed by our learned colleague, the Former NBA Gombe Branch Vice Chairman and O/C Legal Correctional Centre Gombe, in person of Yakubu Chidama, Esq. and others as Complainants against the Management of JED Plc Gombe. When the case came up, the Defence Counsel Yuwa, Esq. applied that the matter be stood down for at least 30 minutes to enable his sick client arrived at the court premises and proceed with the matter. In opposing the application, MK Gurumyen, Esq. made a prayer that if the Defence Counsel is sincere with his application, then may God heal his client, but if otherwise, may God increase the severe pain on the sick Accused person. Then from there a hit argument ensued between the two learned colleagues at the bar in the presence of the court which according to the wounded counsel John Yuwa, Esq., he only got a blow from Chief MK Gurumyen, Esq. leading to a serious wound inside and outer part of his mouth where he profusely bled and stained both his Bar shirt and the court’s premises as seen in the herein attached photographs. While Gurumyen on the other hand, stated that it was the wounded counsel that first hit his nose with his finger, calling this boy sit down, and that caused him to retaliate with a blow on the mouth of the wounded counsel.

While John Yuwa, Esq. denied Gurumyen’s assertion and stated that he did not touch his nose with his finger. What he only did after the attack, he instructed some of the JED’s staff present in the court to call the police. Our learned sister and Prosecuting State Counsel attached to CMC 11 Gombe Remalia Solomon, Esq.(Mrs) who was also within the court premises, called my attention as the Branch Chairman on the issue and luckily, I was also closed to the court premises at that very time.

On reaching there, I found out that our learned Police O/C Legal Umeadi Thomas, Esq. instantly instructed the matter be referred to him at his office instead of taking it to Tumfure Police Division as intended by the police officer presence in the court. I myself took the wounded counsel ( John Yuwo, Esq.) to Specialist Hospital Gombe for treatment where he was scanned, diagnosed and treated with stitches inside and outer parts of his mouth before he was given a medical prescription and discharged. The Bar paid the sum of Eight Thousand Naira (N8000.00) only for the hospital medical bills. So at this junction, we really appreciate the presence of our members the likes of the former Branch Secretary Rabiu Ayuba, Esq., our learned sister KK Jumo, Esq.(Mrs), Raphael Obotidem, Esq. and one NYSC Corp member Muhammad, Esq. at the hospital. The Bar really thanks you for the solidarity.

We then went back to the office of the Police O/C Legal at the State CID Gombe along with the wounded counsel and his client with other staff of JED Gombe office where we had a long discussion on the issue with him and pleaded with him to allow the Branch to intervene and settle the matter amicably at the NBA Secretarait. The O/C Legal seriously showed his disappointment on the whole incident and the disputant counsel, he admonished the duo and obliged the Bar to go and settle them at the Secretariat. With reverence, we highly appreciate Oga O/C Legal for this intervention and good understanding with the Bar! Kudos!

At the NBA Secretarait, the settlement attempted to hold in the presence of the wounded counsel John Wuyo, Esq, Chief MK Gurumyen, Esq., the North East Zonal Coordinator Legal Aid Council Oga Titus Lektu Esq., Former Vice Chairman Yakubu Chidama, Esq, some staff of JED Gombe office on the part of the Branch excos, we had the presence of the Branch Secretary: Nuruddeen Bello Babayo, Esq., the Treasurer: Rahinat I. Talle, Esq. (Mrs), the Welfare Secretary YG Ahmed, Esq. headed by my humble self.

As Chairman, I strongly condemned the incident on behalf of the Branch and also highly appreciated the timely intervention of the O/C Legal for not only referring the case to his office instead of Tumfure Police Division and by extension, allowing the Jewel Bar to settle the matter amicably for the interest of peace to reign and of course the solid unity of the Bar. Then I also requested our learned senior Oga Lektu, Esq. as the most senior present at the settlement to talk first. Oga Lektu, Esq. regretted the whole incident and showed his keen interest for the matter be settled at the Branch level.

On his own side, our wounded learned colleague John Yuwo, Esq. stated that he knows Chief MK Gurumyen, Esq. since from his University days in Jos. Also as a senior to Gurumyen, Esq. and both of whom hailed from the same state (Plateau), he was not expecting such an act from him. Then Gurumyen instantly interjected with verbal attack against the wounded counsel again. Another fresh arguemnet between the two disputant counsel ensued again leading to the frustration of the settlement because the wounded counsel was once again bitterly sad with the insults uttered by MK Gurumyen, Esq. against his person despite the wound he sustained from his blow on his mouth.

NOW THE STAND OF THE JEWEL BAR ON THE WHOLE ISSUE

1. We strongly condemn the unfortunate and unprecedented incident that occurred between the two counsel leading to the wound of our guest learned colleague, John Wuyo Esq. of Jos Branch. It is very disheartening and uncalled for as well as unethical to our noble profession and the Jewel Bar which is known with peaceful legal practice right from its inception till to the bitter experience of today. As we were thought and reminded times without number during our legal training at the Nigerian Law School that _clients come and go but lawyers remain in the temple of justice._

2. Though the wounded colleague John Wuyo, Esq. was seriously wounded in his both inside and outer part of his mouth and profusely lost his blood that stained his Bar shirt and the court’s premises, but it is not true that his tooth was removed in the incident. We therefore call on all our members and the general public to shun all fake news that our learned colleague Yuwo , Esq. lost his tooth in the fight as went viral all over the social media.

3. Though for now, our colleague Yuwo, Esq. already left for Jos with the intention of taking further step after consultation with his Branch, at the Jewel Bar, our position is very clear that we are not happy with the words further uttered by our learned MK Gurumyen, Esq. at the NBA Secretarait which further frustrated the settlement, however, we should not relent in pursuing the settlement of the case amicably because we never experienced such situation in the history of the Jewel Bar and it is our responsibility to see our learned colleagues (both members of the Branch and our visiting guests) are happy and enjoying the Jewel jurisdiction in their legal practice.

For now, this is for the information of all members NBA Gombe Branch and other relevant fora that may wish to be updated on the unfortunate incident of today in the Chief Magistrate Court No.3 Gombe.
We will further update the house on any development on the issue in due cause.

We pray for the uninterrupted peaceful coexistence continuation in the Jewel Bar, Gombe State and all other NBA Branches in Nigeria, ameeen.

Thank you and GOD bless.