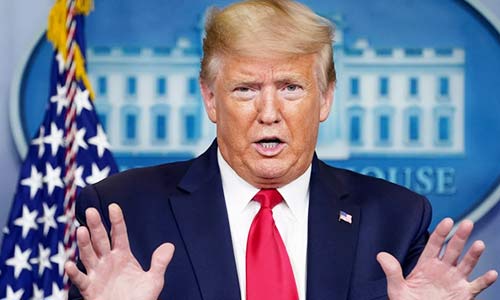 Donald Trump announced he is designating all places of worship – including churches, synagogues and mosques – “essential,” saying he wants them to “open right now.”

The president panned state leaders for keeping “liquor stores and abortion centres” open during the coronavirus lock down while keeping places of worship shuttered. “It’s not right,” he said, declaring his move is aimed at “correcting this injustice.”

“If there’s any question, they’re going to have to call me,” Mr Trump said in the White House briefing room. “But they are not going to be successful in that call.”

“In America, we need more prayer,” Mr Trump said before leaving the briefing room. “Not less.”

But, a few minutes later, White House Press Secretary Kayleigh McEnany said whether religious houses open will be up to their leaders, as well as state and local officials. She could not cite any federal statute that would give any president the authority to legally override a state or local leader on such a matter. Ms McEnany, notably, is an attorney.

The president was in the briefing only to read a short statement announcing he has approved guidelines from the Centers for Disease Control and Prevention tailored to help state and local leaders safely allow worship facilities to open back up.

But earlier on Friday, the president had a bit more to say on the subject during an event marking Memorial Day.

“I consider them essential, and that’s one of the things we’re saying. We’re going to make that essential,” Mr Trump said. “You know, they have places [deemed] essential that aren’t essential. And they open, and yet the churches aren’t allowed to open, and the synagogues. And again, places of faith, mosques, places of faith.”

Notably, a large chunk of Mr Trump’s political base is very religious.

He took 75 per cent of the white evangelical vote in 2016. Recent polling shows he remains about that popular with that voting bloc with Election Day just six months away.

Like the rest of his base, Mr Trump needs those highly religious conservative voters to turn out in big numbers in a handful of key battleground states, where he mostly trails former Vice President Joe Biden.

Deborah Birx, one of Mr Trump’s top health officials, urged leaders of religious centres to contact their local officials about the number of cases.

While Mr Trump said he wants them all open “this weekend,” she said maybe some should “wait a week.”

It’s just the latest example of how the president and his top coronavirus advisers often contradict one another, sometimes within minutes.