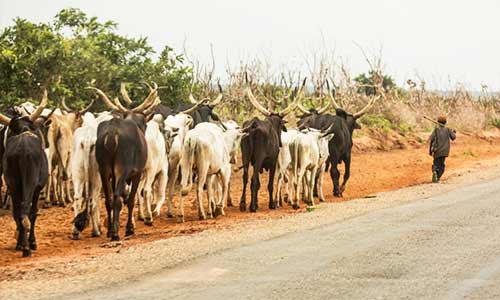 The Law prohibiting open grazing of cattle and other livestock and providing for establishment of ranches came into effect on November 1, in Benue State.

Under the provisions of the law, it is an offence for anybody to openly graze cattle and other animals. Those engaged in the livestock production are expected to apply and obtain land from government at already designated places for the establishment of ranches.

Although signed in May 2017, the state government allowed a six-month grace period for implementation of the law during which those engaged in cattle rearing and other animals were expected to acquire ranches for their animals.

Since its enactment, the law has come under fierce criticism from Fulani Herders whose open grazing activities have been a major source of incessant clashes with farmers across the nooks and crannies of the State.

The Herdsmen under the umbrella body of Miyetti Allah Hautal Kore did not only file a suite in Court challenging the legality of the law, it threatened to mobilise its members nationwide to storm the state in protest against the implementation of the law.

It is an irony that the Fulani Herdsmen have kicked against this law which has also provided stiff penalties for those fund guilty of cattle rustling.

In our view, the incessant clashes between Herders and farmers in recent years has become a national emergency and not just a common security situation, requiring an urgent national response.

In Benue state, about 40 clashes are recorded to have occurred between farmers and the Herders between 2013 and 2016 in 14 of the the State’s 23 LGAs.

According to Benue Community Leaders who recently addressed a World Press Conference in Abuja, the clashes led to the killings of “over 2000 people including men, women and children; over 500 persons are missing while over half a million people were displaced and the future of almost a million youths truncated.”

We are disappointed, to say the least, that Presidential directives to the security agencies to deal with the Herdsmen’s violence have so far yielded very little or no positive results as the attacks by the Fulani Herders have continued unabated with the accompanying devastating consequences.

That no Herdsman has ever been arrested in Benue state or elsewhere and brought to justice for the frequent unjustifiable attacks, arson, killings, raping and other criminal activities against the farmers, raises questions about the efficiency or neutrality of the nation’s security agencies.

It is clear to us there is yet a serious national strategy to effectively deal with this recurring security situation. Against this background, we cannot but endorse the measures taken by the Benue state Government to deal with this embarrassing phenomenon, particularly, the enactment of the Anti-Open Grazing Law.

We urge the Benue State Government to ensure full implementation of the law and to make no hesitation in bringing violators to book.

In the wake of the take-off of the law, Fulani Herders are said to have massively moved out of Benue to the neighbouring states of Cross River, Taraba and Nasarawa where again, clashes have been reported with farmers.

In the light of this development, we call on the other states of the Federation to also consider enacting their own versions of the open grazing prohibition law.

We are gladdened that this Law is not targeted at the Fulani Herders alone but all other persons engaged in the activity of breeding and rearing of cattle. That been the case, it is uncharitable to give it an ethnic, sectional or religious bent as being insinuated by Miyetti Allah Kautal Hore and other critics of the law.

To that extent therefore, we urge the Benue State Government to take necessary measures to ensure FULL compliance by ALL those engaged in rearing livestock and not the Fulani Herders alone. It is a known fact some of the elites in Benue and other rural farmers also keep cattle, goats, sheep, horses, and donkeys, all of whom must comply with the law.

We submit that ranching of cattle, which the anti-open grazing law seeks to promote, is the best international practice in modern livestock farming in countries like US, Argentina and Brazil, among other countries with higher number of cattle than Nigeria.

The anti-open grazing law, in our opinion, is the best solution to the incessant violent clashes between Herders and farmers and must be allowed to succeed.

Accordingly, we urge all concerned to cooperate with the Benue state government to ensure its successful implementation.