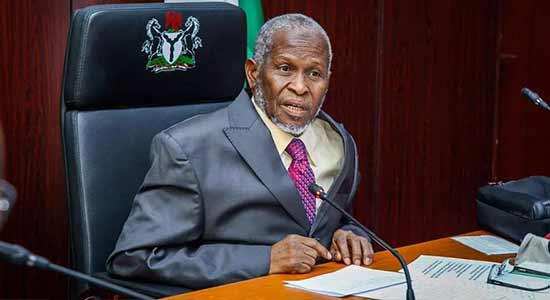 Worried that their budgetary allocation has not increased for four years, Justices of the Supreme Court have protested to the Chief Justice of Nigeria (CJN) Justice lbrahim Tanko Muhammad.

In the protest conveyed to the head of the Judiciary via a letter, the Justices complained that poor welfare had hindered their job.

The apex court has been receiving N110 billion yearly since 2018 despite the increase in its size and responsibilities.

It was learnt that its annual budget was not always regularly cash-backed leading to non-provision of essential services for the Justices.

Unable to bear this anymore, the Justices protested to the CJN. Justice Muhammad told his colleagues he had been accountable and transparent.

A source at the apex court said the problems, which were beyond the CJN, included delay in cash backing the budget of the apex court.

Disturbed by the tension between the CJN and the Justices, the Emir of Lafia, Justice Sidi Bage Muhammad has waded in.

After some shuttles, the retired Bage at the weekend succeeded in brokering peace with a resolution to appeal to the executive arm to address the challenges facing the Supreme Court Justices.

Investigation revealed that the tension at the apex court has been festering since March 23, when the CJN constituted a Welfare Committee.

On March 24, the committee submitted a list of demands by the Supreme Court Justices to the CJN.

Others are internal problems including non-signing of amended Rules of Court for almost three years; sudden stoppage of two to three foreign workshops and trainings per annum for Justices; no provision of qualified legal assistants.

A source said: “On the 24th day of March, 2022, the welfare committee submitted a report to request for review of electricity allowance because of the increase in electricity tariff nationwide.

“The welfare Committee also submitted our request for diesel allowance, because of the epileptic electricity supply, the astronomical hike in the price of diesel and the fact that Justices require electricity to work at home.

“Recently, the Chief Registrar served Justices with an internal memo, that electricity would be supplied to the Court between the hours of 8am and 4pm daily, for lack of diesel.

“The implication of this memo is that the Justices must finish their work and close before 4pm. With all due respect, this is the peak of the degeneration of the Court; it is the height of decadence, and clear evidence of the absence of probity and moral rectitude.

“This act alone portends imminent danger to the survival of this Court and the Judiciary as an institution, which is gradually drifting to extinction. The Judiciary is an arm of Government.

“The Supreme Court of Nigeria, just like the Presidential Villa and the National Assembly, is the seat of the Judiciary as an arm of Government. The implication of the memo is that this arm of Government is potentially shut down. May God never allow that day.

“The Committee also requested for the restoration of our monthly Internet allowance, because we require uninterrupted Internet service in order to have access to materials online to write our judgments.

“With regard to Justice’s vehicles, several are due for replacement, while the new Justices have not received their full complement of vehicles to date. Moreover, some of the vehicles supplied to the Justices are either refurbished or substandard.”

Another source in the apex court gave more insights into the challenges facing it.

The source said that apart from welfare problems, there are issues affecting the performance of the judges including the non-signing of the amended Rules of Court for almost three years.

The justices complained of lack of opportunities to attend two to three trainings in a year.

The source added: “The state of health care in the court has deteriorated. The Supreme Court clinic has become a mere consulting clinic. Drugs are not available to treat minor ailments. There is general lack of concern for Justices who require immediate or emergency medical intervention.

“The Rules of Court are the immediate tools employed by Justices to dispense Justice to Court users. The amended Rules of Court have been kept for almost three years now, awaiting signature. We strongly believe the new rules will aid speedy dispensation of Justice.

“At the meeting we also discussed training. In the past Justices were nominated to attend two to three foreign workshops and trainings per annum with an accompanying person for reasons of age.

“Justices have only attended, two workshops in Dubai and Zanzibar. They were not accorded the privilege of travelling with accompanying persons as was the practice. We demand to know what has become of our training funds.

“Another issue discussed was the provision of qualified legal assistants. We are aware that even lower Courts provide legal assistants for their Justices and Judges. The Supreme Court, apart from being the highest Court in the land, is a policy Court.

“We are confronted with various complex legal issues of national significance with the addition of time bound matters coming in between our regular Court sittings. We require qualified legal assistants in order to offer our best. “

Problems beyond CJN, says official
An official of the apex court, who spoke with our correspondent off-the-cuff after one week of investigation, said the problems were not the CJN’s fault.

He said: “There were issues between the CJN and the Supreme Court Justices but they have been resolved by a former Justice of the court, Justice Sidi Bage Muhammadu I, who is the Emir of Lafia.

“In fact the last of such peace meeting was held last Thursday and a permanent reconciliation sealed on Friday. Bage made many shuttles until he brokered peace.

“The challenges are connected with the delay in cash backing the Supreme Court budget. It is one thing to have the budget on paper, it is another thing to release the funds to the court. The release takes some time.

“We are all aware of the economic problem facing the country. The Executive cannot dispense the cash it does not have.

“Again, the Supreme Court has been receiving N110billion since 2018 without any increase. The salaries and allowances of the Justices were last reviewed in 2017. Where is the fault of the CJN?

“Concerning electricity supply, it is a general problem in the country. Even at that the CJN ensures that supply is available from morning till 6pm.

“The high cost of diesel is not the making of the CJN, who is not even in charge of the coordination of the basic needs of the court. We may need to adjust the budget to increase the diesel allowance of the Justices. It also means, some services will suffer.”

On accommodation, the source added: “I think what happened was that some Justices were not comfortable with the accommodation provided for them for security reasons. I think every Justice has accommodation now.”

Asked of the outcome of the peace meeting, the official said: “The CJN will take action on the Rules of the Court; we will adjust budget to cater for the comfort of justices and there will now be regular consultations on the operation of the court to avoid miscommunication of this nature.

“I think the CJN and Supreme Court Justices are now on the same page. Those of us in the administration will implement all the resolutions agreed upon by the parties.”