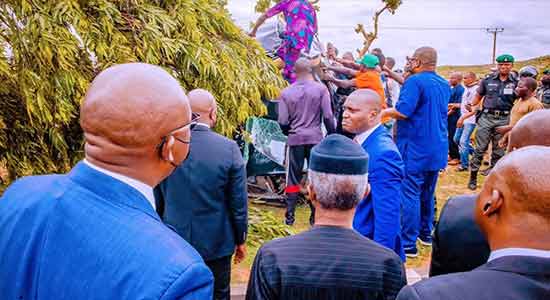 The convoy of Vice-President Yemi Osinbajo was not involved in an accident on airport road, Abuja.

Some media reports (Not TheNigerialawyer) had claimed that the vice-president’s car somersaulted on the airport road in the nation’s capital on Monday.

But Laolu Akande, spokesman of the vice-president, described the reports as fake news.

”On his way to the airport this morning, VP came across a road traffic accident, stopped to lend assistance & ensured victim was taken to the hospital with VP’s convoy ambulance. He then proceeded on his trip and is now in Ondo State heading to site of yesterday’s attack in Owo,” he said.

”VP’s security and medical teams assisted in removing the victim from the crushed vehicle resulting from a somersault. And transported patient to Airforce base hospital. It was a solo accident. The car had summersaulted on the opposite lane and was impaled on a tree.”

The vice-president was heading for Owo, Ondo state on a condolence visit when he saw the scene of the accident and intervened.

Reacting to the incident, President Muhammadu Buhari said only demons from the underworld would have conceived and carried out the attack.

Buhari condoled with the families of the deceased, the Ondo state government and the Catholic community.

On his part, Rotimi Akeredolu, governor of Ondo, said his administration will hunt down the perpetrators of the attack on the church.

The spokesperson to the vice-president said Osinbajo will deliver the president’s condolence message in Owo.

“The VP heads out to Owo, (Ondo State this morning) where worshippers were heinously attacked yesterday resulting in many casualties. He will deliver president’s condolences and message in person,” Akande said.