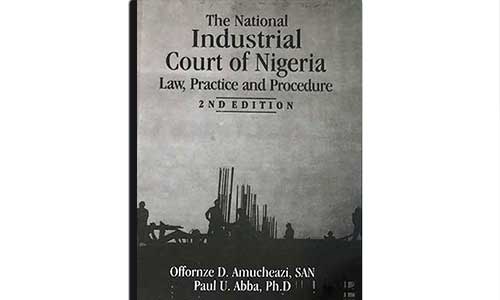 When this book was published in 2013, the Constitution of the federal Republic of Nigeria (Third Alteration) Act 2010 (which came into effect in January 2011) was barely three years old and the National Industrial Court of Nigeria(NICN) was still adjusting to its newly invigorated constitutional status as a  superior court of record.

The practice and procedure adopted by the NICN were still based on the National Industrial Court Rules  2007 which was promulgated prior to the court’s enhanced constitutional status and, therefore, not reflective of the expanded powers, jurisdiction, functions and responsibilities conferred on the court by the Third Alteration. Importantly, also, the case law surrounding labour cases at the NICN were largely based on pre-Third Alteration jurisprudence and this was reflected in the limited scope of the interpretation of the labour and employment right by the NICN, and the absence of available case law on innovative aspects of the court’s constitutional jurisdiction including the application of international labour conventions and best practices, discrimination and sexual harassment at the work place, arbitration of labour disputes  and establishment of ADR centres for adjudication, criminal jurisdiction and, importantly, the seemingly restrictive right of appeal from decisions of the NICN.

Subsequent to the publication of the first edition of this book , several monumental changes have occurred in the law, practice and procedure of the NICN  that render this second edition imperative in ensuring that readers are kept  abreast of developments in labour and employment adjudication at the NICN. While there have not been any changes at the level of primary legislation in the NICN – The alteration and the NICN Act 2006 remain unchanged – developments at the subsidiary legislation  level and  importantly, case law, have significantly changed the outlook of labour adjudication before the NICN. The two key changes in this respect are  the promulgation of the National industrial Court Rules 2017 which restructured the practice and procedure of the NICN and introduced innovative procedures; and two landmark decisions by full panels of the Supreme court in Coca-Cola Nigeria Limited & anor v. Mrs. Titilayo Akinsanya (2017) 17 NWLR (pt 1593) 75 (interpreting the exclusive jurisdiction of the NICNN as extending to  private contracts of employment under section 254C) and Sky Bank V. Victor Anaemem Iwu (2017) LPELR-42595(interpreting the right of appeal from the decisions of the NICN to the court of Appeal from the decision of the NICN  to the Court of Appeal under Section 240 and 243 of the 1999 constitution (as amended). In Skye  Bank, by rejecting the literal interpretation of section 243(2) and (3) and adopting a liberal interpretation in  line with the mischief and golden principles of interpretation, the Supreme Court denounced the generally held opinion that appeals from decisions of the NICN lay to the Court of Appeal only on questions of fundamental human rights under the constitution and opened up a new vista of appellate review of the decision of NICN by the Court of appeal (with leave of the court of appeal). This decision by the apex court renders incongruous portions of the first edition of this book on appeals from NICN’s decision which were based on the extant  understanding of Sections 243(2) and (3) as restricting appeals from decisions of the NICN to only fundamental rights questions. Chapter eleven of the book has, therefore, had to be substantially revised to reflect the new position of the law on appeals from NICN’s decisions as elucidated by the Supreme Court in Sky Bank.

In addition, several case law have developed post -2014 on the various topics discussed in the first edition of this book which are necessary to be reflected in the discussions of these topics to present an enriched analysis of the growth and development of the NICN brought about by its constitutional status. Recent decisions of the NICN on the application of ILO conventions, international best practices in  labour matters, discrimination and sexual harassment at the work place and the limitation of the jurisdiction scope of the NICN’s adjudication on the matters incidental to labour and employment matters shed light on the approach of the court to its expanded jurisdiction under the Third Alteration Act and are, therefore, utilized in the discussions on these subjects in the edition.

To incorporate the significant changes to the practice and procedure of the NICN brought about by the National Industrial Court Rules 2017, this edition has updated the provisions of the  NICN’s Rules to reflect the 2017 rules and highlighted areas of innovation by the 2017 Rules, utilizing relevant case law, where available. Because the 2017 Rules is a reflection of the expanded jurisdiction of the court as provided for by the Constitution of the Federal Republic of Nigeria (Third Alteration) Act, 2010, it is more expansive, ambitious, detailed and determinative of the various practice and procedure issues before the court, covering most of the loopholes evident from the application of the 2007 Rules and minimizing the recourse to the Rules of the regular High Court to fill up lacunas in the 2017 Rules – it contains sixty-seven Orders compared to the 2007 rules which contains only twenty-nine Orders.