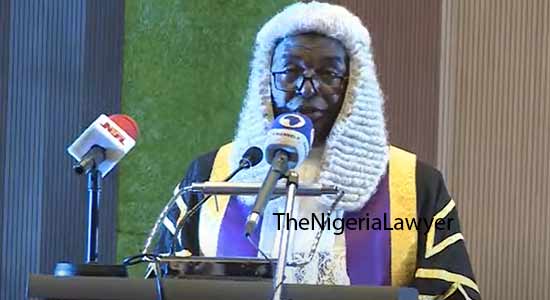 The Body of Benchers has today called 1491 successful applicants from the Nigerian Law School to Bar as qualified and eligible legal practitioners under law. The applicants who were successful in the May Bar Finals were presented for call by the Director General of the Council of Legal Education of the Nigeria Law School, Prof. Isa Chiroma SAN.

Presenting the applicants, the Director General paid respect to all distinguished personalities in the ceremony, and stated that 2299 persons applied while 1490 persons were successful, thus amounting to a 65.42% success rate in the Law School.

In his report to the Body of Benchers during the colorful ceremony, Chiroma remarking on the security tension of the Nation, stated that all threats to the Nigerian Law School, has never and will never see the light of the day. He however noted that the Council is not leaving any stone unturned, as security had been beefed up around the law school for adequate protection. He equally appreciated the heads of the Nigerian Law Enforcement agencies for their support towards the protection of the law school.

He went on to recall the history of the Council of Legal Education of the Nigeria Law School which he traced back to its establishment in 1962, for the purpose of training lawyers which it has been doing ever since then with Council training an average of over 6,000 students every year from the humble beginnings of 8 students in 1963 when it begun. According to him, the Nigerian Law School has for over 6 decades played significant role in the Nigerian legal profession, training an entire arm of government, the judiciary, without any cause to shut down.

Chiroma went on to state that the Nigeria Law School had contributed to the training of the legal manpower of sister African countries such as Gambia, Sierra Leone, and Cameroon. He stated that the NLS had made the most despite limited resources at their disposal.

He appreciated graciously the intervention Gov. Nyesome Wike who built a Law School Campus in Port Harcourt, Rivers State which would soon be commissioned and handed over to the Council of Legal Education, NLS. In lieu of this, he expressed his gratitude once again to President Buhari, Gov. Nyesome Wike, and the Attorney General of The Federation, Malami SAN for making this possible. He also thanked the class of 1986 of Nigeria Law School for the building and commissioning of twin moot courts for use in the NLS, Headquarters, Abuja.

On this note, the Director General went on to present the 1490 candidates for Call to Bar, attesting to their good performance. He congratulated the new wigs and their parents and guidance, and charged the new wigs to make good advantage of the opportunities in the legal profession as well as ensure strict adherence to the ethics of the profession.

He expressed his appreciation to the BoB, the Ministry of Justice, the secretariat of the BoB for their constant support to the NLS. He extended this appreciation to the all-work ethics of the academics and all academics members of the NLS which he said work tirelessly and over time to ensure that the task of producing legal manpower of the country was attained

Finally, the Director General went to present finally the successful applicants, stating that they were eligible to be called to the bar. He affirmed and conformed that they had successfully passed all the academic and etiquette test put in place for them and met all the requirement of the NLS, and that they exhibited good manners during their training. He noted that the screening committee of the BoB had confirmed their eligibility

He went on to present the list of the 1,491 applicants to the Chairman of the BoB, Wole Olanipekun SAN who called them to bar.