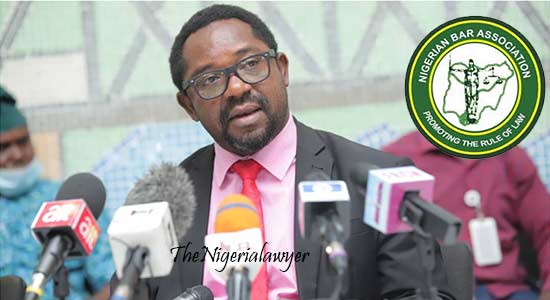 *Describes Invasion As Affront On The Constitution Of FRN

In a speech delivered by the Branch Chairman Justin Gbagir Esq. On Saturday, it describes the act as uncalled for and a breach of their fundamental rights.

He also urged the Benue State Govt to liaise with the government at the centre and get to the root of this issue and further move in to assuage the condition of the people of the villages and communities now displaced by providing shelter and basic amenities for them.

Below is the full speech delivered by the Chairman.

Distinguished Ladies and Gentlemen, Men of the Press, good morning.

1.1. Benue State is at the moment bereft of peace, but peace is sacrosanct in all spheres of human endeavour animated on the society beautifully made by God for the good of all men. This peace if disrupted, sends society to the doldrums, human life and properties become the immediate damage which is often very collateral. This prefix us to the event of 8th April, 2021, in what became the invasion of the Tiv villages of Konshisha and Gwer East Local Governments of Benue State.

1.2. Background to the day is premised on the communal crises between the Bonta Community in Shangav-Tiev Clan of Konshisha local government and their Igede counter-parts in Okpute, in Oju local government of the same state. The crises snowballed and degenerated into the unthinkable and unimaginable when the Nigerian Army on the on the 7TH and 8th April, 2021 unleashed arson in the most inhuman, internationally and legally unacceptable standards on the Tiv communities of Bonta, Gungul, Adoka, Guleya, Agidi, Gbinde, Agune in Konshisha and Mbayase of Ullam in Gwer-East Local Government Areas occasioning in unquantifiable terms and measures, wanton destruction of peoples home, farms and other sundry properties using military war hardwares and power fire against innocent and defenseless citizens who perhaps look up to the same military for defence and protection. It is to say the least a gory sight to behold as men and women, old and young, children and domestic animals scamper helter-skelter for refuge and protection against the thunderous and heavy fire power of the Nigerian Army.

1.3. The media as a prelude to this carnage had on the 6th of April, 2021 been confronted with the yet to be confirmed allegation of the killing of Army officers by bandits along Achoho-Oju road. As we went to press, an army press release found online with reference no 72 SF BN/G3/230/01 titled, INCIDENT REPORT ON AMBUSH AND KILLING OF CAPTAIN AT ADEDAYO (N/14875) AND 11 OTHER SOLDIERS ON 5 APR 21 AT KONSHISHA LGA BENUE STATE, stated in succinct terms that, officers of the Army where on a special operational duty to Oju on a routine movement to the Joint Operation Whirl Stroke/72 Special Forces. This according to the military was to bring succour and calm to the warring communities of Bonta and Okpute, but rather the officers met their untimely date. The vanguard newspaper of 9th April 2021 also has the vestiges of the release referred to earlier.

1.4. If this was actually the mission of these officers as designated by their superiors and these reports, then switching the touch pad of the trigger on the helpless communities outside the warring areas of Bonta and Okpute has become a matter of grave concern and solemn contemplation as to the real motive of the Army.

1.5. As an association stewed in prolife, we condemn in the most unequivocal terms and without any strand of reservation the killing of human beings for whatever reason and stand against the administration of jungle justice in all its petals and bowels.

1.6. We further, decry the brazen, uncivil, beastly and commando approach of the Nigerian Army on the lives and properties of the communities of Bonta, Gungul, Adoka, Guleya, Agidi, Gbinde, Agune Konshsisha and Mbayase of Ullam in Gwer-East Local Government Areas. This act does not correspond in any fashion and style with international best practices to human life, justice and fair trial. It negates the grain of the Constitution of the Federal Republic of Nigeria (1999) As Amended and is horizontally and diametrically out of sync with natural law, good conscience and the prescribed code for the protection and dignity of the human person world over.

1.7. It is our concern that, the spate of insecurity in the nation which to a very large extent appears to defile all military tactics and other conventional security setup and know-how, should be concentrated more on, with the attendant will to improving it and not to worsen it by the actors which are supposed to work even harder to preserve the nation, herein the military.

1.8. This particular act is a re-enactment of the invasion by the military of the Tiv villages and communities of Gbeji, Vaase, Zaki-biam of Sankera axis of Benue State. It is the reopening of the wounds of several victims dead and alife of the injustice the military perpetrated on their communities and their Odi counter-parts in Rivers State. It is a sad day for the nation and the people of Benue State in Konshisha and Gwer-East Local Governments.

2. As an organisation which respect the promotion of human life and the rule of law, we will not and do not support the acts of civilian or any individual’s attack on security operatives and will not condone such attitude from any community or individual as the narrative is been publicized and we pray the perpetrators of such acts if any should be fished out and brought to book.
3. Also, we do not support the unleashing of needless force, air strikes and ground fire power, threat to life, arson and senseless killing as alleged in some quarters on innocent citizens of the country under whatever guise. The proper thing to do in an allegation of crime is for the accused/perpetrator as the case may be to go through the full procedure of criminal trial as provided under the criminal procedure of the country and nothing else. The action of the Army is most unprofessional, barbaric and completely negates the rule of engagement of a civilized and reformed military especially in the 21st century. The action betrays logic, common sense, decency and civil dealing with civilians.

3.1. Consequently, we are worried given the explanations offered by the military on the assignment of the military officers and the length and depth the operation nosedived and the armoury employed on helpless civilians. We call on the President and Commander-in- Chief, Muhammadu Buhari and the military high command to cause an investigation into the real intent of the operation which has brought in a load of humanitarian crisis that left innocent citizens homeless, food stuffs burnt, economic trees destroyed and human lives alleged to have been lost.

3.2. This is one destructions too many, which fuels the thinking that it is premeditated, properly planned and executed with the agenda to decimate and exterminate the Tivs. Why is the other warring party not affected in the carnage brought forth by the Army?

3.3. We call on the international community to beam her search light and come to the aid of the defenceless people of Konshisha and Gwer-East Local Gover#nments of Benue State who today can no longer sleep in their homes but in the bush, on trees and stay under the sun due to the insensitive and unprofessional actions of the Nigerian military.

3.4. I kindly further request the Benue State government to liaise with the government at the centre and get to the root of this issue and further move in to assuage the condition of the people of the villages and communities now displaced by providing shelter and basic amenities for them.

3.5. As a closing statement, we appeal to our brothers and sisters affected in this dastardly act by the military to exercise restraint, ensure to be law abiding by not taking laws into their hands and must be patient as those concerned will investigate this action by the Military. It is our assurances that, this action by the military must be questioned beyond mere pages of papers.

3.6. Gentlemen of the Press, for the souls said to have been lost long ago and in the few days in the course of this crisis between the Bonta people, the Okpute people and the military invasion, may we observe a minute silence for them. May their souls and all the souls of the faithful departed through the mercy of God rest in peace, Amen,

Thank you gentlemen of the press.